Feedback from host Nelly Gan: “The input I received about Brother William’s Seminar as well as the Crusade was that this was the very first time in Manokwari that there was teaching/discipleship like that, and very many people were blessed.” 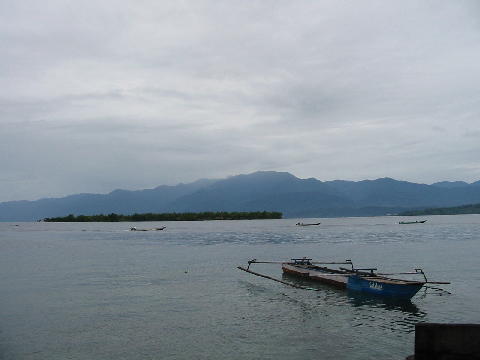 Papua – the most primitive region of Indonesia

I arrived here in the town of Manokwari early yesterday afternoon. Geographically, Papua is at the very eastern end of Indonesia, not far from Australia. By contrast, the tsunami-stricken area of Aceh is at the very opposite western end of Indonesia close to Malaysia. The distance from Papua to Aceh is roughly 3,000 miles, similar to that between Los Angeles and New York.

The principal sponsor of our meetings is a Christian businesnesswoman named Nellie Gan (and her mother, Mrs. Ganadi) who was raised in Papua but years ago moved away to settle in faraway Jakarta. She is an on site intercessor who attends Abbalove Church in Jakarta where already twice we have held our Seminar and Crusade.

Upon my arrival in Manokwari, known as the “City of the Gospel” because it was the gateway through which many years ago missionaries first entered Papua, Nellie reported to me that the “Gospel” here had essentially lost its power. 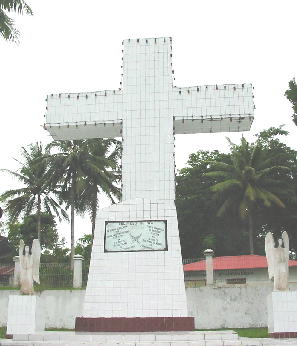 The approach of visiting evangelists and pastors who want to hold meetings here is typically to drop money into the hands of the local leaders. This quite naturally has engendered a very unhealthy attitude in some local pastors and leaders in which Crusades and Conferences are primarily money-making opportunities. Even more shockingly, they think it permissible to employ the services of a witch doctor to get a larger crowd to come to the meeting so that more people can hear the gospel and “get saved!” In the prevailing Christian culture of Manokwari, moreover, there are men who fail at a secular pursuit and so by default study to be a preacher or pastor. Ministry for them might be simply a respectable stepping-stone to a higher calling such as government service as a member of the Indonesian House of Representatives. This is what can happens in an area when the gospel for some reason has been reduced to a form of godliness lacking the power thereof. (Of course not all leaders here fit that mold.)

In terms of denominations, mainline Protestant churches here hold the majority, followed by the Pentecostals. I think the Catholics come in third. Isl–m is a minority here, though not a small one. The overall winner, and I say this only half-jokingly, may be witchcraft. It’s a situation sadly reminiscent of what I saw in Africa.

In this prevailing spiritual environment it was a challenge for Sister Nellie to meet with the leaders and interest them in attending our Seminar and Crusade. We would not drop money into their laps or engage in any unbiblical practices often associated with such meetings. I believe the Lord has called me here to bring restoration to His Church here in Manokwari.

Last night at our first Training session the 500-seat hall was less than half-filled. (A couple of weddings in town and the anniversary celebration of a big Indonesian Church denomination conflicted with the session.) Nevertheless the Lord was faithful to anoint me to minister and to teach. Before going into the teaching on healing, I touched on some of the unscriptural attitudes prevailing in the leaders that surely grieve the Holy Spirit. At the end of the session we did a demonstration of the believer’s authority over disease and demons to show the people that the teaching is indeed from the word of God. Quite a few infirm people were healed and came up to testify of what the Lord had done as we believers exercised our authority over disease and demons in Christ’s. The results were a bit unusual for a training session and nearly approached what we usually see in an actual evangelistic Crusade where the miracles are normally more in number and greater in magnitude.

One dramatic deliverance was that of a recent convert to Christ from Hinduism. He was suffering from demonic attack from his stomach up to his head and had even been taken to a Musl__m practitioner of witchcraft for help, which of course simply made things worse. The entire assembly of believers joined together in one spirit to rebuke the demons and to command them to leave. After several minutes of “hand-to-hand combat” with the demons accompanied by manifestations in the man, he felt his body released and set free from the torment.

The servants of the Lord who attended the training were extremely built up by the teaching. Our host Mrs. Ganadi commented that she has hosted many well-known Indonesian pastors who came and preached wonderfully, but none did the work of actually equipping the saints to do the work of ministry in the way that was accomplished at the training. They had never heard anything like it even though it is soundly supported in the New Testament. Among them were Brother Ulis who serves in Campus Crusade here and an instructor at a local theological Seminary. Perhaps the main enemy stronghold here is witchcraft and related beliefs. The Church for the most part has been unable to demonstrate the superiority of God’s power over the power of witchcraft, and so it remains a very powerful lure and stumbling block to people here. Missionaries sent to preach the the gospel to outlying tribes are known to go in fear of being attacked by the powers of darkness. But through the meetings the spirit and power of Elijah is being restored to the Church of Jesus Christ here. Among other things, the spirit of Elijah proclaims to the world from Mt. Carmel: “My God is the true God, and I will demonstrate it to you right now.” 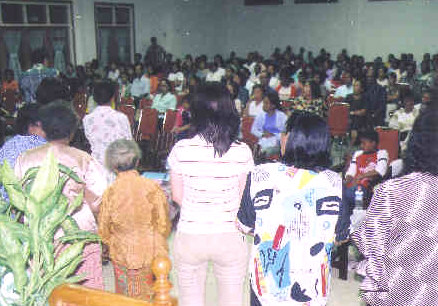 At the two evangelistic healing Crusades, the Lord multiplied his signs and wonders through the disciples trained in the Seminar. Each evening I proclaimed the gospel of Jesus Christ clearly and concisely. Then I would ask the trained believers to join me at the front to demonstrate that the gospel was indeed the absolute truth, that there is no way to the Father except through Jesus Christ. But before we ministered in Jesus’ name, I followed the prophet Elijah’s example at Mr. Carmel and asked if there were any who wanted to attempt to heal the sick using the power of witchcraft or the power of another god. There were no takers. So we the servants of the Most High called on the name of our God. Together from the front of the hall we exercised our authority over diseases and demons given by the Lord and ministered “mass” healing to those in their seats who needed physical healing. The Lord heard our prayer, and each evening many were healed. 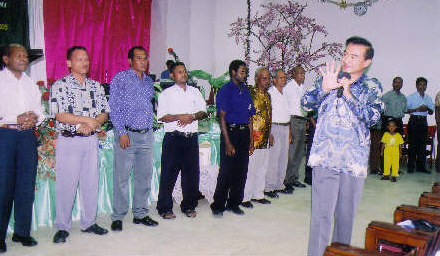 Those who were healed stood up and came forward to the front to give public testimony of what Jesus had done for them. At the second meeting about thirty people lined the entire width of the hall to testify. The miraculous healings were diverse. Among the more notable that I could recall: a woman who had paralysis on the right side of her body was able to move about quite normally. A young man with a speech defect was able to speak normally. The lump on a woman’s back disappeared. An older man who could not get up to walk because he would simply fall down was able to walk normally. A younger man was healed of his infirmity and announced excitedly that he was renouncing his trust in witchcraft to follow Christ and was going to throw out all his associated charms and fetishes. There were many other testimonies. 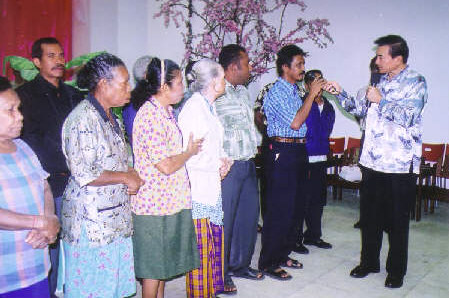 Above & Below: people line up across the hall to testify that they have been healed in the name of Jesus Christ 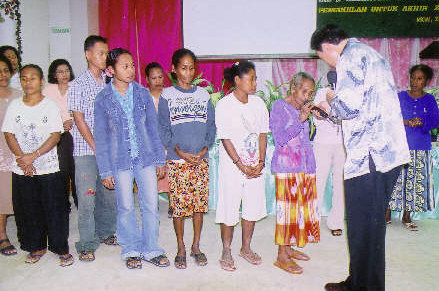 I seized upon the testimonies as tangible proof that Jesus Christ has authority to forgive man’s sin and is the only way to Heaven. It was clear to the people that no other god or gods could perform such miracles in the way that Jesus had just done through His disciple. I challenged the people to repent and follow Him. Each evening precious souls, seeing the incontrovertible evidence that our God is the true God, streamed forward to receive Jesus Christ as Lord and Savior. 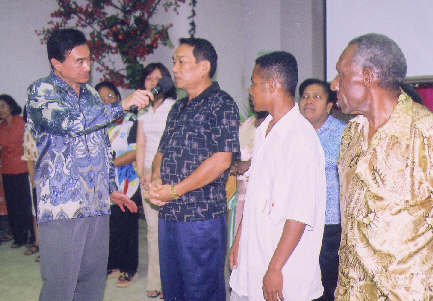 Above: the testimonies of healings continue 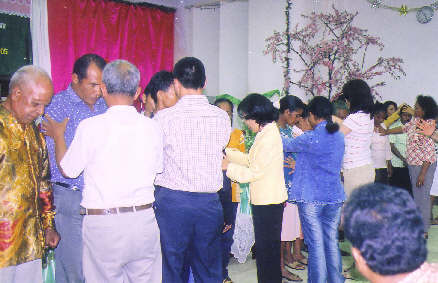 After the meeting trained believers continue to minister healing

The important thing to me is not exactly how many came forward to follow Jesus at the two meetings. What is far more significant is that the servants of the Lord who were trained are now going to preach the gospel in the same way. They have been delivered from the spirit of fear and powerlessness; the spirit that the Lord gave to his prophet Elijah has been restored to them. This is the beginning of the restoration of the Church of Jesus Christ in Papua.