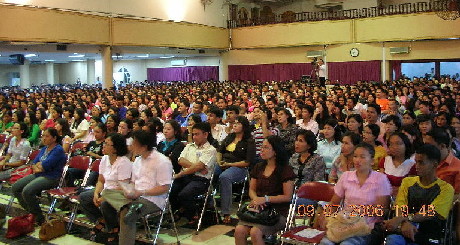 Bethel Church of Indonesia in Medan, North Sumatra is a growing 30,000-member church in Indonesia’s third largest city. (It is a branch of Bethel Church of Indonesia Jakarta, the much larger mother church.) Medan is not far from Aceh, the area of Indonesia devastated by the December 2004 tsunami. The Senior Pastor of the church is Bambang Yonan. Bill and Lucy were invited to do some introductory teaching and ministering during four days.

The meeting room at the offices of the church was filled with people for the Equipping Seminar. Several hungry saints sat on the floor at the very front. The Lord strongly anointed me to teach. When it came time for the demonstration of healing, the Lord released His power through the believers. During the first stage of ministering to the infirm, all who came forward for healing were healed.

We met with over one thousand young adults in the main hall of the church for their weekly Saturday evening service. In one hour I was able to give them an introduction to the teaching as well as to have them minister healing to one another in Christ’s name. The healing focused on headaches and stomachaches, infirmities which are relative “easy” to heal. Most of those who came forward testified of being healed, as well as one young woman at the very end who testified of being healed from both physical and emotional trauma suffered from sexual abuse (possibly rape) and being delivered from a curse that had been placed on her. 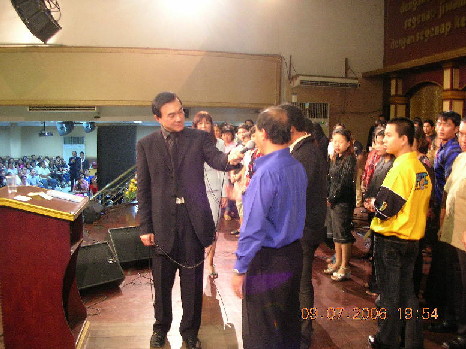 We receive healing testimonies after the believers minister

The Lord was gracious throughout the day’s various Sunday Services. Lucy and I ministered in four of their several different rented locations where multiple services are held each Sunday. (In many places in Indonesia today, it is very difficult to get government permission for a church building.) In the 10:30 AM Indonesian-Chinese service, eighteen precious souls came to Christ after they heard the preaching of the gospel and saw the miraculous healings performed in Christ’s name by the local believers. In the other services, we trained the believers and then had them minister healing to one another. The testimonies of healing were many. The leaders of the church would like to bring us back for more complete equipping. We have heard a report that the trained believers are already applying what they have just learned in settings such as hospitals.

One of several Sunday Services at Bethel Church