The Elijah Challenge at the Heavy Rain Conference, Seattle, May 2009

Vietnamese believers explode in the spirit and power of Elijah

The Heavy Rain Conference was hosted by Rev. Huu Nguyen Trang of Thien-An (“Heavenly Peace”) Baptist Church and attended by pastors and believers from around the Pacific Northwest, including Portland and Vancouver. The Basic Training took place over a period of nine hours. Several believers were healed of infirmities during the demonstrations of healing that took place at the various Training sessions. After that, an Evangelistic Healing Outreach was held for the infirm and the lost.

William & Rev. Nguyen Van Nang of Portland who translated for him

This woman had come in a wheelchair with no movement at all in her legs because of a broken hip, and also unable to speak. After receiving ministry at the Saturday evening meeting, she was able to move her legs and walk slowly with the assistance of her son (right). She also began to to speak softly.

The Evangelistic Outreach after the Basic Training
m

Jesus Christ was greatly glorified at the Evangelistic Service before a crowd of Vietnamese people. We shared from John 14 where Jesus made astonishing claims about himself: the only way to heaven and in fact God in human flesh. Was he a raving lunatic or was he telling the truth? Our eternal destiny would depend on the answer to this question. If he was a lunatic and we follow him, then we are going to hell. But if he was telling the truth, then we would in fact have found the way to heaven. What would be the proof that his claims were in fact true? The proof would be the miracles that he did.

John 14:11 Believe me when I say that I am in the Father and the Father is in me; or at least believe on the evidence of the miracles themselves.

We told the crowd that we would ask the Lord to perform miracles of healing through his followers in accordance with John 14:12.

John 14:12 I tell you the truth, anyone who has faith in me will do what I have been doing.

The miracles performed by his trained disciples would be the undeniable proof that the claims that he made about himself were in fact true. We had the disciples come to the front facing the crowd in a single line. After we prayed to the Lord, the infirm came forward to be healed.

The disciples made short work of the infirmities. After the dust settled, people came up to the platform to testify that Jesus had healed them. There were many testimonies, including some from unbelievers who had been healed. People kept coming up to testify even after the closing prayer at the end of the meeting. It was an exciting occasion for the Vietnamese disciples of Jesus Christ.

Photo Gallery of people testifying of their healing

The miracles were the undeniable proof that Jesus was in fact not a lunatic but what he had claimed to be: the only way to the Father, and the Son of God who died on the cross to bear the sins of man. Ten people formally repented and decided to follow Jesus Christ as Lord. The saints rejoiced at the goodness of our God. That weekend was just the beginning of a move of the kingdom of God among the Vietnamese in the Pacific Northwest. The Vietnamese disciples were given a powerful weapon for reaching the lost and fulfilling the Great Commission.

Powerful testimony in the aftermath of the Training

“Thank you for your training at the Heavy Rain Conference last month. Many Christians from Seattle, Portland, and Vancouver were very excited and encouraged about the Training on Healing. They have already started to apply what they have learned at their local churches.”

Significant updates from Vietnam received while in Seattle
m

One of the pastors whom William trained at the October 2008 Elijah Challenge Training in Houston last year went back to Vietnam and held a large Crusade in a stadium on Resurrection Day 2009. It was reported that 16,000 people were in attendance on the third and final day. Many miraculous healings in the crowd took place as the pastor ministered healing-at-a-distance (as Jesus did in Luke 7). A large number of people streamed forward to testify of what the Lord had done for them. 1,500 Vietnamese accepted Jesus Christ as Lord and Savior after hearing the gospel and seeing the miracles.

In the historic 2003 Crusade in Saigon where William ministered, one of the noteworthy miracles involved a woman who had been suffering from cancer of the womb for two years. She had been carried to the Crusade on a cot. The cancer had eaten away at her body, leaving her mere skin and bones. She had so little strength she could barely lift her arm. During the meeting she stood up from the cot and walked up to the stage on her own power to testify that the Lord had healed her and that she was well.

This powerful miracle was later prominently featured on the DVD which was circulated among Vietnamese churches and believers around the world.

At the Basic Training in Seattle in May 2009, William was approached by a Vietnamese pastor named Philip who was based in Vancouver. He told William that his wife was a good friend of the woman who had been healed of the cancer, and that she in fact had been present at the meeting when the miracle occurred. According to Pastor Philip’s wife, her friend is fine and continues to be in good health since the Lord healed her. See the photos of her below taken at the 2003 Crusade. 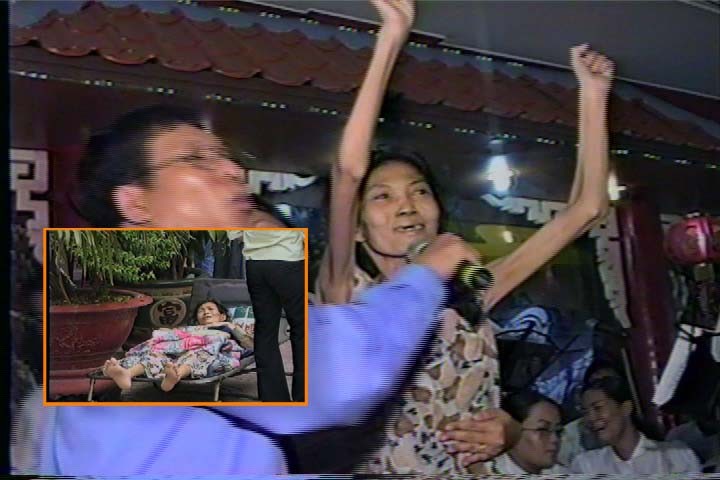 Woman emaciated by cancer (insert) was carried to the meeting by eight friends. She climbs up to platform by herself and testifies she has been healed by the Lord Jesus Christ. It was reported in May 2009 that she is fine and continues to be in good health. 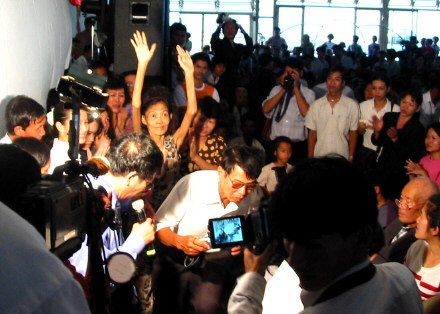 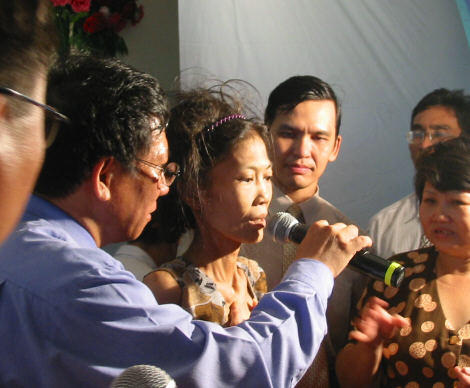 Testifying on the stage before an amazed crowd

Notice: You may read in English the following Drafted Letter

Gospel of Preaching and Healing

Based on the result of the prayers meeting on May 30, 2009 ( from 8:30am -12:30 ), at Thiên Ân Church (Senior Pastor Trang), we are the members of Saturday Morning Meeting Prayers would like to inform you, special those who were trained at Revival Conference ( Texas) , Heavy Rain Conference ( Seattle), or other Training Seminars by Pastor William. After long discussing, we decided “going out”, out reaching to the public, we asked your cooperation to join us to do, so:

1.- to form many small groups to visit our community members ( may be door-to-door)
2.- to form many group of volunteers, as street preachers, at several corners from Phước Lộc Thọ ( S. Seattle), White Center (S.W. Seattle ) 99 Super Market (in Renton & Kent), Chinatown (downtown), Little Saigon (12th & Jackson)
3.- and every 3 months, we will join together to become a big groups of missionary, and to have a big meeting seminar to preach for the public ( as pastor William did ) in the community center ( such as Lynnwood, Bellevue, Mercer Island, South Center, Tacoma..we vote together to choose..)

( Suggestion: Time frame for this preparation is from June 1 to July 4th, 2009..or sooner, depend your call, and burning desire to serve the Lord..)
Because this is a big project, we need your cooperation from many pastors, deacons, bros & sisters and friends who love to serve the Lord to “going out”, outreaching our community people.

We asked your cooperation in may ways; from activity to preaching materials; such as books, newspapers, magazine, CD, DVD..to give away to the public to serve people in our community.

You may and can refer this notice to others, your friends to create an opportunity available, so they can participate to serve the Lord in at large.
I f you have any idea, or a question, please don’t hesitate to contact Pastor Trang, Pastor Hồ, Pastor Trường, Bro. Dung, Nhân, Quan & Dung, K. Phượng and Thiệt ( Ted) ( from Nguồn An Bình, www.nguonanbinh.org )
( May need phone and emails enclosed?. Please let me know. Thank. TD. )
Please correct, adjust this letter to become our best letter before to send out to the public. Thank.