The name of the Lord Jesus Christ showed itself powerful to heal through believers for the sake of the gospel in the Austin area…one man who was completely deaf in one ear could hear again as a young sister ministered to him. As Jesus Christ rebuked infirmities with the authority given by the Father 2,000 years ago, believers today can also exercise this authority over disease for confirming the gospel.

Elder Edwards of the New Testament Restoration Church, Co-Sponsor of the Healing Encounter 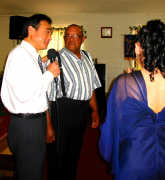 This gentleman came to the meeting completely deaf in his right ear as well as suffering from a severe lower back problem. Sister Yvette, a 22-year-old believer from Michigan, came forward to minister healing to him. Beforehand, I spoke into his right ear through the microphone while he was standing right next to me and he could not hear me at all. Yvette put her finger into his ear three times and commanded the spirit of deafness to go and for the ear to be opened in Jesus’ name. His hearing was immediately restored. I tested his hearing by having him turn and face his deaf ear towards his wife Allie, who was seated about ten feet away. After I had covered his good left hear with my finger, she asked him in a normal voice where they had just vacationed in New Mexico. He answered, “Alamogordo,” the town in that state that they had visited!

Another believer laid hands on his disabled back, rebuking the infirmity and commanding it to be healed in the name of Jesus. Immediately he was surprised to find that he could bend over and lift his arms as he could not just moments before! 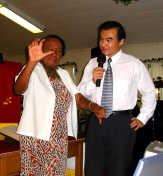 For years sister Rachel had had pain in her right hand, especially when closing her fingers. When she was ministered to in the authority of the name of Jesus, the pain left instantly. The next morning she came to the Encounter testifying about what the Lord had done for her. During that night some stiffness tried to creep back into her hand, but when she rebuked it in Jesus’ name, it left!

Ray had pain in his lower back, but after a believer laid hands on him in Jesus’ name, the pain vanished and he was able to bend his back freely. However, the next day, the pain was back. Once again we rebuked the infirmity in the name of Jeseus, and it left as before.

Missionary John had pain because of a root canal that did not heal properly. After a believers rebuked the pain and commanded the root canal to heal in Christ’s name, the pain disappeared.

This sister’s pain left her body when she was ministered to by one of the believers in the name of Jesus.

Her husband suffered from shooting pain in his knees, especially in a stooped position. After a believer in the meeting ministered to him, he could bend his knees without pain.

Allie suffered from unexplained pain and burning in her side abdominal area, especially when she pressed down on it. When a believer who had never ministered to the infirm before laid hands on her side, she could feel the power of God flow into Allie’s body. Afterwards Allie could no longer find the pain, even when pressing down on her side.

At the Saturday evening open-air meeting, a brother had been having shoulder pain for a couple of weeks. The pain left and he regained freedom to lift his arm after a believer in the meeting laid hands on his shoulder to rebuke the infirmity in the powerful name of Jesus Christ.

Michael had suffered from chronic discomfort and pain in his big toe because of an ingrown toenail. When brother Domingo laid his hand on the toe and commanded the pain to leave with the authority given to believers by Christ, Michael felt the toe go numb. Later in the evening,