.
In March 2007 The Elijah Challenge held the Seminar and Crusade on the Malaysian portion of the large island of Borneo. In the map below, you can see that East Malaysia (and tiny Brunei) featured in pink occupies the northern part of the island. The meetings were held in the East Malaysian state of Sabah, in the town of Tawau which is in the circle near the upper right-hand corner. (The greater part of Malaysia, known as Peninsular Malaysia to the west of Borneo, is not included in the map.) 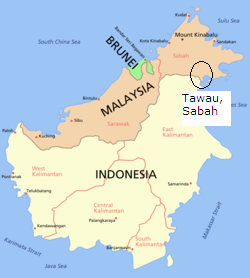 Borneo is shared by Malaysia, Indonesia, and Brunei

The Seminar and Crusade was hosted by the Malay-speaking congregation of St. Patrick’s Anglican Church, the largest church in the state of Sabah. Host Pastor Arun Kuak of the large Malay-speaking congregation—there are also separate English-speaking and Mandarin-speaking congregations—said that mostly pastors, leaders, and full-time servants of the Lord were in attendance. They came from several different major denominations as well as independent churches. This was the first time in East Malaysia that a Seminar to equip the body of Christ to heal the sick was held. 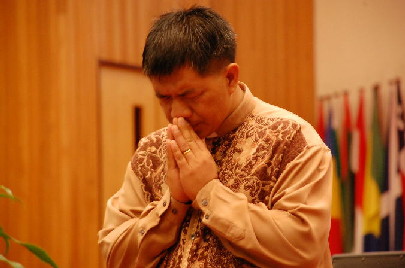 The first evening session had about 200 people in attendance, some of the participants from quite far away. One group drove for eight hours to Tawau. Others flew in from other parts of East Malaysia. Perhaps thirty people altogether testified of being healed at the evening session. A growth on a woman’s arm was reported missing after the mass healing which capped the session. 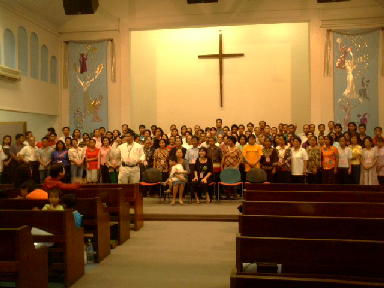 Servants of God equipped in the Seminar

The first Evangelistic Healing Service following the three days of equipping was awesome by most measures. 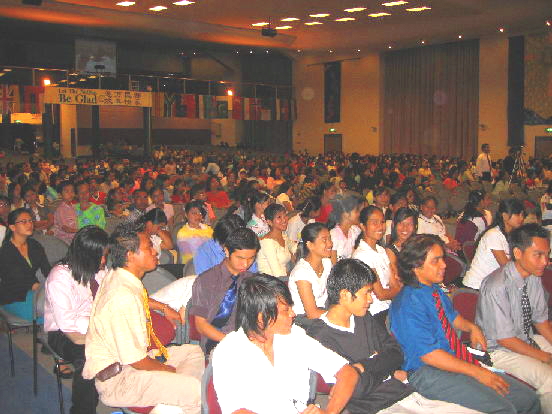 After the preaching from John 14, the Lord was asked to demonstrate through miraculous healings that Jesus is the only way to the Father. After prayer the servants of God stepped onto the battlefield and ministered as they had been taught in the Seminar.

Above & below: the trained servants of God prepare to heal the sick

The Lord moved through them with great power. Pastor Kuak estimated that in all OVER ONE HUNDRED people testified. Those who were healed came up to the stage and formed a line that snaked around the large stage. Some of the testimonies were quite dramatic. The very last one was given by a young man who had had very poor vision—he mentioned that the prescription for his eyeglasses was 300. During the time of ministry the Lord healed his eyesight. From atop the platform at the front he could read the words on a banner hung far away on the back wall of the spacious 2,000-seat sanctuary—words that even we could not read. To accent his testimony he took out his thick eyeglasses and broke them in half before the delighted crowd. 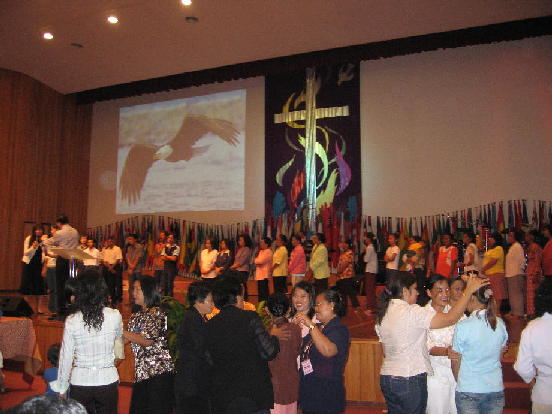 At the Sunday service the following morning the Lord again moved with power. People were healed during the mass healing and twelve of them came up to the platform to testify. One of them healed was an active-duty soldier, a hardened Drill Sargeant who had come to church in his combat fatigues just after coming off duty that morning. He had a bad wrist, and had tried several times but unsuccessfully to have it treated. That morning the Lord healed his wrist. He could hardly finish his testimony, breaking down in tears before the awed 1,000-plus worshippers. The Lord’s love was being poured down upon His people in manifest fashion.

Later that evening at the second and final Evangelistic Healing Service, another display of the Lord’s miraculous healing power THROUGH THE HANDS OF HIS NEWLY-TRAINED MALAYSIAN DISCIPLES was witnessed. 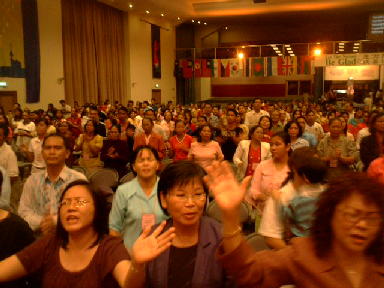 After it was proclaimed from Mark 2 that His power and authority to heal miraculously demonstrate His power to forgive sins, the Lord was entreated to do show His power to heal. THEN HIS TRAINED MALAYSIAN DISCIPLES were sent into action to lay hands on the infirm and to heal them as they did the previous evening. The results were just as stunning. Within minutes a long line of people assembled on the big platform and testified one-by-one how the Lord had healed them.

People healed by the Lord waiting in line to testify

Perhaps the most memorable testimony of the evening was from a young woman who had suffered from a cancerous tumor on her neck. Her father had died from the same disease. On the first evening she had received the laying on of hands from a couple of sisters just trained in the Seminar. Immediately she discovered that she was able to turn her head from left to right without any more pain. After the meeting she went home. When she awoke the next morning the tumor on the left side of her neck was gone. Through sobs the following evening from the stage she shared this testimony of the Lord’s awesome love and grace. 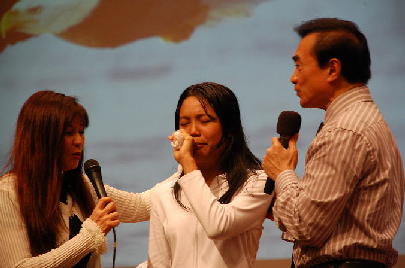 Above & below: she testifies that her cancerous tumor has disappeared 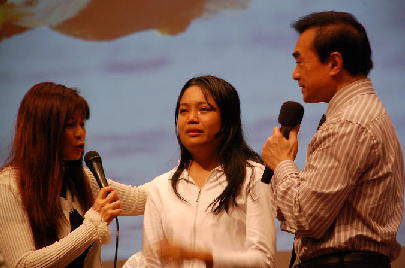 According to host Pastor Arun Kuak the meetings were HISTORIC in nature. Of course this was not the first Healing Service in the state of Sabah. Powerfully anointed servants of God have come from the outside and performed miraculous healings one-by-one on long lines of patiently waiting people while the crowds looked on in awe. When the anointed servant of God left, however, the miracles left with him.

BUT THIS WAS THE FIRST TIME THAT THE LORD USED LOCAL MALAYSIAN DISCIPLES to heal the sick as Jesus and His disciples did. Since one hundred plus disciples of the Christ ministered in the meetings, there was little waiting time for the infirm to be healed. Multiplied miracles took place within minutes.

The miraculous healings will continue as the local disciples of Jesus and believers proclaim the kingdom of God to the lost. The seed of faith has been planted in this congregation and in the pastors who came from all over Sabah and the neighboring state of Sarawak. There will be impact on the Great Commission in East Malaysia.

One newly-trained believer, one of the two ladies who laid hands on the young woman healed of the neck cancer, had no words to express her gratitude to the Lord for what He given her through the training. 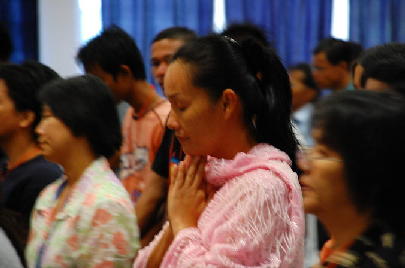 During the time of healing ministry the first evening when the two sisters were approached by the young woman with the cancer on her neck—by most measures a “difficult” healing—they felt not up to the task. They stepped back for a moment of prayer to the Lord for His strength and grace. Then returning to the young woman, they laid hands on the tumor and rebuked it with power and authority in Jesus’ name. They then asked her to turn her head. Normally she was unable to do this because of the tumor on her neck. But now she could turn her head with no pain at all. She went up to the platform to testify.

The rest is history…upon waking up the next morning the tumor had disappeared.

In the meetings it was proven without a shadow of doubt that Jesus Christ has authority to forgive sin and to save from condemnation in hell. He is the only way to the Father.

Pastor Arun wrote the following week in the Malay language:

Here is the English translation:

“We are very thankful to the Lord for the revealing of His power at St. Patrick’s Church in Tawau. Many people marveled at the wonders the Lord performed. Never before had we had a healing service where so many people were healed. This week some people will testify about their healing in some of our services. I have chosen some people whose illnesses were well known to the community to testify about their healing. I believe that through their testimonies many people will come to the Lord.

I would like to thank [you] for [your] willingness to come to teach us secrets from the word of God that are not known by most churches. Personally I learned much from [your] Seminar.”

“We here are very thankful to the Lord because the manifestation of His healing power continues. At our service on March 18, 2007 last week, I preached in two locations. During the praise and worship I suddenly felt the calf of my right leg hurting, and I wondered to myself why it was hurting like that? I remembered how the Lord gave you words of knowledge for healing in that way. So I wrote it down on a piece of paper. The pain suddenly disappeared. At the end of my message I asked the congregation who had pain in their right calf, and a hand went up. Then I led the entire congregation in ministering mass healing. The person was healed of the pain which it turned out was a long-term chronic condition. In that Sunday service seven people were healed through the mass healing. One person had a cough, another a bad ankle and wrist. Praise the Lord.

I myself was amazed and now exercise authority with greater confidence to prove to anyone that Jesus is Lord.”

An intercessor at St. Patrick’s wrote on March 25:

“Saturday afternoon as I went to Pastor Arun’s office to get the key to open the church door for prayer…he was so excited to share with me that he and the trained believers practiced at their Sunday Service what had been taught them in the Seminar…many people were healed ….those who had been healed at the earlier two evangelistic healing services were asked to testify at various places….as the testimonies were being shared….the congregation broke down and cried….because they never see and witness miracles like this.”

Received from Sabah in May 2007 from a servant of God who attended the event:

“Greetings, Reverend. I am very thankful to the Lord, for I have finished teaching my congregation The End Time Model of Evangelism Seminar. Friday evening we had a service and we did a demonstration based on the Seminar. There were some people who came forward to receive ministry from the believers and at that time they were healed. One person with a chronic headache was healed. Another one who felt physically weak in his body was healed. Thank the Lord for your prayer support and that of your intercessors. Our congregation is now increasingly bold to minister with ‘the faith of God.’ Thank you and may the Lord bless us all.”

The original message in the Malay language:

After this, Evangelist Alexander and the believers he trained held a Healing Service. Below is his report on the results of the meeting translated into English:

“…Praise the Lord the Healing Service last night went well. There were about thirty people in attendance. I am grateful to the Lord for His works. There were those who suffered from migraine, pain in the eyes, in the waist, convulsions, blurred vision, stomach pain, headache. These infirmities were driven out with authority and the people were healed. The co-workers who ministered with me with also very happy with the results and look forward to greater ministry…”

Below is his original message in the Malay language: