The First Training Events of The Elijah Challenge in Brazil – 2005

I was invited to teach the students at the Horizons Missionary Training Base in Monte Verde a few hours outside of Sao Paulo. These are chosen ones who are willing to risk their lives for the gospel of Jesus Christ in hostile lands far away from home. Decades ago as young missionaries Lucille and I stepped foot on primitive Indonesian Borneo not knowing a single soul there and what awaited us. (If you’d like to download our book, click here.) Rarely have I met with such a receptive group of believers. It was such a joy to be able to announce to them that a new day for the Church has dawned. No longer will we run from the giants of Isl–m, Hinduism, Buddhism, and witchcraft as the Israelites ran in terror from Goliath. Rather, like David with the kingly anointing we shall run forward to confront and kill the enemy. And like in the time of Purim in the Book of Esther, the Church has now been given authority to rise up and annihilate those who hate us and want to exterminate us. These precious servants of the Kingdom, ranging in age from a tender fourteen to a few of middle age cheered and applauded with gusto when they heard that the Lord is restoring the spirit of Elijah to the Church. This is the spirit that compels us to proclaim boldly to the world: “My God is the true God, and I will demonstrate it to you in power right now.”

The enemy has apparently noticed my presence here. During sleep last night I was harassed by a dragon in a nightmare. It was a rather persistent ordeal and did not terminate until I rose from my bed and rebuked the enemy harshly in the name of Jesus Christ. Such experiences are relatively rare for me…the last one that I can recall happened in a hotel room in Nigeria in January 2004. Then earlier this morning I locked my door and went downstairs for breakfast. When I left my room the bathroom door was open all the way. After breakfast—perhaps a half hour later—I returned to my room. I found the bathroom inexplicably closed. The bathroom window was closed; there was no gust of wind that could have closed the door. I checked the door and found that it does not easily swing shut by itself. Perhaps my being here is a threat to the interests of the enemy. He does not frighten me one bit. By our God we have seen his works destroyed time and time again around the world. And we shall see his kingdom retreat here as well.

I’d like to add that a few additional “strange” things have happened. Last night I had another nightmare, although it was light compared to the one I had the night before. And, next to my bedroom is another bedroom which is not currently occupied. The door is usually closed. This morning the door to that bedroom was found unexplicably completely open. And finally, there is the matter of my electric shaver. It has a head that can be removed for cleaning the blades. I normally leave the head on the shaver when not in use. This morning as I reached into the medicine cabinet to get it to shave, I found the head mysteriously released from the shaver. I’m not terribly concerned about these petty annoyances, but it’s interesting that the enemy is concerned. I believe I have been given a weapon that will result in nothing less than disaster to the interests of the dark kingdom when unleashed in the hands of the Horizon missionaries around the world.

I reported in my earlier updates from Brazil, I was experiencing some rather strange attacks the first few days of my stay here. I have ministered in some extremely dark nations of the world, but I have never seen some of the things I did here at this Missionary Training Base. Today at the end of our training session as we ministered to those with infirmities we also experienced another first. Almost always the first person we minister to at a training session is healed. Today, not only the first person was not healed, but the second person we ministered to was also not healed. I can never recall this ever happening before.

Instead of trying for a possible third strike, we did a mass healing with all the believers exercising their authority over disease and demons. In the middle of it, I led the people in addressing demons of witchcraft, commanding to leave in the name of Jesus. As we did this, a brother sitting in the meeting received a revelation/vision from the Lord. He saw a group of people in a jungle standing around a fire and praying against what we were doing. They were praying that the students would not receive the teaching and become discouraged.

(After the ministry of mass healing, I asked who had been healed and four people acknowledged their healing. One was a middle-aged sister who was experiencing pain and tenderness in her ear as a result of an infection that she had had when she was young. She was completely healed.)

After the class, I learned the full extent of the situation. The town of Mount Verde (“Green Mountain”) where the Horizons Base is located is a “high place” and an extraordinary stronghold of witchcraft and the New Age, and they have spiritually infiltrated the Base. Some years ago a witch actually enrolled as a student and succeeded in physically infiltrating the School. Quite a few of the students here commonly experience nightmares and other unusual attacks. One sister told me that if you climb up to certain place overlooking the area, you can actually see the demons running around. A big witchcraft/New Age conference is held here annually. My translator told me that some of their adherents are praying and fasting against what we are doing here. Now I understand what has been going on.

The following night after supper the believers came together to pray. During prayer, one received a revelation from the Lord that the enemy intends to embarass us. Then in the middle of the night my translator Sintia was disturbed by a visible demonic force as she slept and she is tired this morning.

In the evening I appeared on the Christian TV Station RIT with Pastor Eber Cocarelli before a TV audience of 500,000 viewers in the Sao Paulo area. He interviewed me for about an hour.

The God of Elijah sent fire in response to the prayers of His people. The mountain town of Monte Verde has been a stronghold of witchcraft and the New Age. Even the Horizons Missions Training Base was infiltrated by demons sent to harass the missionaries at night when they try to sleep. The local purveyors of darkness were intent on embarrassing us. It was reminiscent of Goliath defying the armies of the Living God.

Hundreds of people gathered at our Crusade in the local gymnasium. I preached from John 14 concerning Jesus Christ, the only way to the Father and God in human flesh. Afterwards we prayed to the Lord and asked him to prove beyond a shadow of doubt that this is the absolute truth….that our God is the only true God.

The Lord responded with miracles as we believers exercised our authority over infirmities and demons through mass healing. The first person to come forward to testify was an elderly woman who had lost sight in one eye because of glaucoma. She said that the Lord had restored her sight. One of the Horizon missionaries could not sing because of hoarseness, and the Lord had restored her voice.

Then the Lord opened up the floodgates as I released the missionaries to minister to the infirm individually through the laying on of hands. Many more were healed and we had difficulty keeping up with all the testimonies of healing. Some testified with tears of gratitude to the Lord streaming down their face. One elderly stroke victim had been brought to the meeting with paralysis on his left side; his arm and hand were stiff and curled up to his chest and he could walk only with a cane. The missionaries laid hands on him and the Lord touched him. He was able to lift his arm and curl his fingers; he began to walk without the cane. Some of the missionaries from a more conservative background jumped up and down for joy seeing how the Lord had used them.

When I gave the invitation to accept Christ, two souls came forward. One was a young man who had just earlier been propositioned to make a pact with the devil. I believe there were many more who wanted to follow Jesus, but hesitated to come forward publicly.

The Lord has vindicated His servants here. It is the enemy who has been embarrassed, not us. When Satan comes in like a flood, the Lord raises up a standard. He displayed power that evening that the witches cannot match. I am encouraging the Horizons leaders and missionaries to continue to confront and demolish the stronghold of witchcraft and the New Age in Monte Verde with public demonstrations of God’s power and the proclamation of the Kingdom of God. The town of Monte Verde was founded in 1939 by a Christian missionary pilot named Vernon Grinberg. But the local churches by not reaching out to the community allowed witchcraft and the New Age to take over. It’s time to take the town back for the Kingdom of God. The missionaries are now equipped to do it. And through their ministry in Monte Verde, I trust the Lord will equip them to minister with great power and effectiveness in the nations of the 1040 Window where they eventually be sent.

I have been invited to return to Brazil next year for wider meetings with Pastor Jonathan of Vale da Bencao (Valley of Blessing in Aracariguama – SP) and Pastor Daniel de Jesus Leite of Ministerio Renovacao em Cristo in Sao Paulo, as well as to teach the next class of Horizons missionaries. 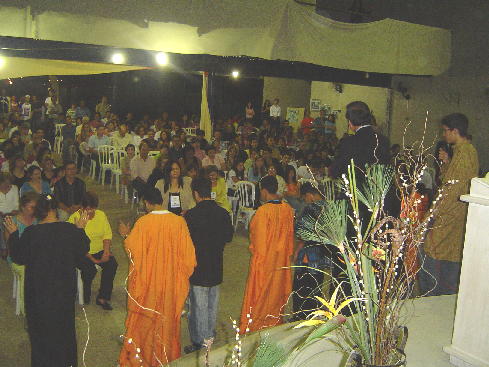