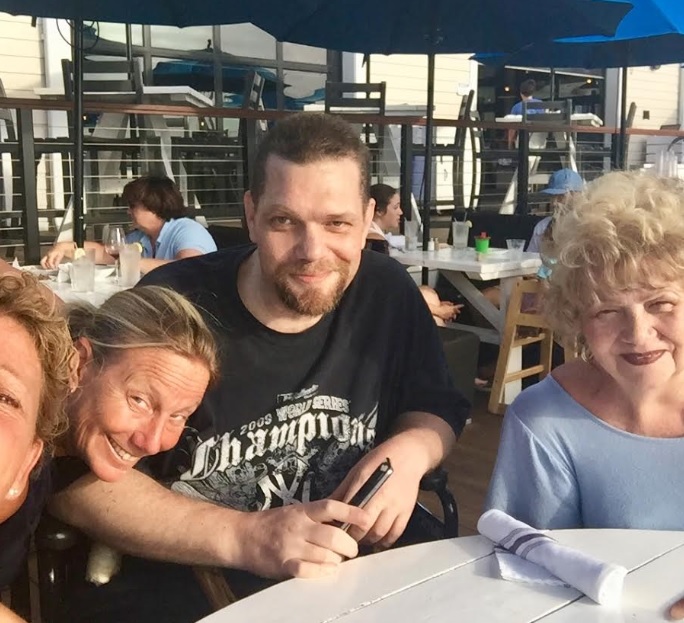 by his mom Bonnie Deering (at right)

Psalm 127:3 Lo, Children are a Heritage of the Lord and the Fruit of the Womb is His Reward

Some of the things you may not know about my son Ryan….

Born, January 17, 1975 to proud parents, Bonnie and Dennis Deering.  Ryan wasn’t aware but he was definitely instrumental in his dad Dennis and me coming to know the Lord Jesus.  Dennis was in the delivery room with me the whole time holding my hand and together we witnessed the miracle of the birth of our son.  It was the beginning of our eyes opening to the wonder of our great God and King.

As an infant I would sit him in his little chair next to me and play the guitar for him, he later became an excellent guitarist and musician, writing many songs.  He even made a guitar for Alyssa who expressed an interest in music, he worked for months perfectly the finishes.

Ryan struggled as a young little guy with hyperactivity, bouncing off walls so to speak at times.  He was so smart and bored altogether with school.  I always thought if they could develop a curriculum around the Yankees and baseball he would have been a straight A student.  He had a passion for baseball, collecting hundreds of baseball cards.

At age 6 Ryan came to us and asked to be baptized, he said God had spoken to him and told him to do this.  The Lord confirmed this by giving me a song in the night “Forbid Not the Children to Come Unto Me” that I sang at his baptism.   Ryan gave testimony “I am here because God told me to”.  I would hold on to that as we encountered many very difficult years.

He loved to take things apart, sometimes putting them back together and sometimes not.  Later he learned how to work on cars from his dad, he could fix almost anything on a car.  It amazed me how he could have 99 parts spread out on the driveway and put everything back into working order.

At age 13 one of his friends’ fathers introduced him to drugs which started a lifelong battle with addiction.  He was addicted from day one.  It was many years before I was able to forgive this man. Young people make wise choices, consider the consequences there is no just once with this insidious disease.

Let me tell you as Ryan’s mom his addiction did not define who he was, a talented musician, writer, poet, sweet caring man who felt things on a level very few are able to understand. It showed in his writings that he would always send me to check out and give my opinion.  He fought back and at times had success especially when he decided to try college and found out he was smart. He graduated as Tim said with honors from BCC and went on to get a Bachelor’s degree double major from the University of Miami in Journalism and Creative Writing. So much potential, at times having victory and then falling prey once again to the darkness.  I have a glorious hope that Ryan in his last few months truly gave himself to Jesus and I will see him again.  Ultimately God won, He wrapped His arms around him and said, “That’s Enough”.

There is so much I could tell you about my son Ryan, much has already been shared.  The pain of loss is beyond words, we had a very special bond, I talked to him almost everyday on the phone and always took his phone calls because I knew he struggled with depression.   I will miss him more than I could ever express to you.  Our children are only loaned to us, they are a gift from God.  The Lord gives and the Lord takes away, Blessed be the Name of the Lord forever.
. .
Hearing is not learning, but it is a start. When “it was the best of times, it was the worst of times,” or the best seemed ever fleeting. Just gotta get it out to make room for the wisdom of the owl, the all sightedness of the eagle and speed of the peregrine falcon to see the best path to travel; Almighty’s creation, examples of his desired path.

Those things cannot be seen with dead pine needles enrobed in sap blocking all but the bleakest of roads; so skilled at lying, the ruse is never seen till the great trixter seems long gone,; laughing at your folly and dancing to a new song it has thus inspired in him, ever waiting in the darkness for an advantage to strike.

But while the great soul prankster knows just where to land his blow and how hard to do the deepest damage, it is lies, always lies.

Often blinded, we need to see the attack strewn out like salted fish in the sun to remind us how many times god has made our far-short jab a knockout punch, our flick to the demon’s neck as if a Jaguar plucking a mouse off a jungle floor.  With his strength sending the fallen fleeing, power of Jesus’ blood washing a billion lead globes beared clean, if slowly but all—his righteousness returns.