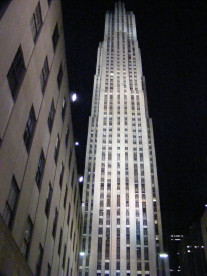 In 1988 we planted a church in Flushing, New York called Power Christian Center. Because the Lord had given us understanding of how to minister to the sick effectively, infirm people who came to the meetings were healed and the church grew quickly. Most of the new believers were Mandarin-speaking people from Taiwan. It was the first church of its kind in New York City.

In 1993 we committed the church into the hands of the Lord and moved out of state to accept a call to pastor another church. Power Christian Center eventually became a Vineyard Church and underwent a series of splits over subsequent years. In December 2009 we were given the opportunity of returning to New York to minister in one of these daughter churches, River of Life Christian Church. Sister Ruth Lin, one of the first members of Power Christian Center twenty years earlier, is now the pastor of River of Life.

With the recent large influx of Mainland Chinese to New York and other US cities, most of the people in River of Life are Mainland Chinese. Because Communism does not acknowledge the existence of God, Chinese who have lived under this ideology for all their lives can be very thirsty for the things of the realm of the spirit. They can be very receptive to the gospel of Jesus Christ.

The Basic Training for the Mainland Chinese

We introduced The Elijah Challenge Basic Training to them over three evenings. Lucille taught one group in Mandarin Chinese while William taught a second smaller group at the same time in English. In Lucille’s Chinese-speaking group the healings were quick as the believers laid hands on the infirm during the demonstrations. We have seen that God is gracious to move powerfully among Chinese-speaking people. 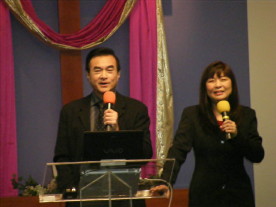 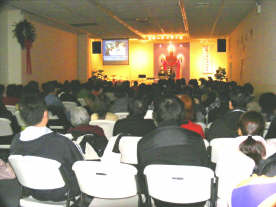 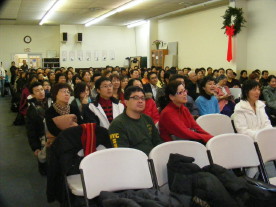 Preaching repentance to the Chinese in the spirit of Elijah

On Sunday morning the last day we shared with the people what the Lord had done with us since leaving Power Christian Center and New York in 1993. Then we shared the word of God with them. We shared with them that twenty years earlier in Power Christian Center our message was primarily that God wants to bless His people on earth in all kinds of ways. It’s a message that people like to hear, and we were very good at presenting it.

But twenty years have passed, and times have changed. We may now be on the cusp of the Second Coming of the Messiah. Our message has changed radically. It is the message that Elijah preached to the backslidden and idolatrous Israelites in his day. It is the same message that John the Baptist preached to the Israelites when he was sent in the spirit and power of Elijah to prepare them for the great and dreadful Day of the Lord. Thus our message to the Chinese believers in River of Life was “REPENT, for the kingdom of heaven is at hand.” As it was in the days of Elijah, so it was in the days of John the Baptist before the Coming of the Messiah. And so shall it be in these days preceding the Return of the Messiah.

No longer will we focus on God’s earthly blessings and on what He can do for us on earth. It is now time to repent and shift our focus to the things of eternity, and how we can live for the Lord and His kingdom in view of His glorious appearing.

The message of repentance confirmed by miraculous healings

We then asked the Lord to confirm this message by healing the infirm who were present. For this we instructed the disciples who had just been trained to come to the front. After prayer, we asked the infirm to come forward to be healed. The disciples ministered to them as they had been trained. Several people were healed and gave public testimony. 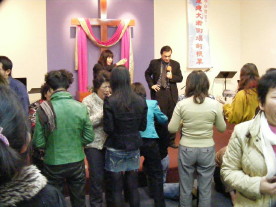 Above & below:
Trained disciples healing the infirm in Jesus’ name 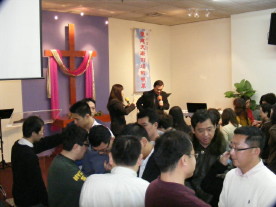 The Lord confirmed the message of repentance to the Chinese believers through the miraculous healings. These are the last days, and the Church must now repent of her obsession with God’s blessings and seek to obey God’s commands. We must now live holy lives in the fear of the Lord and focus on fulfilling the Great Commission.

Some of the believers commented that they had never heard such a message before. The people repented of their lukewarmness and self-centeredness. We encouraged them to obey the Lord’s commands.

Joseph was born with a silver spoon in his mouth, but at a young age ran away from home. He was raised in foster homes in New York, and eventually ran afoul of the law to serve time in prison. After being released from prison, Joseph changed his ways. He started a family and a successful business. But Joseph found little satisfaction in earthly success. He and his family began to go to River of Life Christian Church. During the Training, the Lord opened his eyes and Joseph began to understand that it was the Lord who had had mercy on him and delivered him from the pit. He began to understand that meaning and satisfaction are found only in the Lord and in serving him. During the Sunday service the Lord used Joseph to heal two infirm people miraculously. He now wants to serve the Lord with all his heart.

Reaching the new superpower with the gospel

With the current ascendancy of China on the world stage to superpower status and the spiritual thirst of the Chinese people under Communist rule, it is now the time to train Mainland Chinese believers and to send them to proclaim the gospel in their home country.