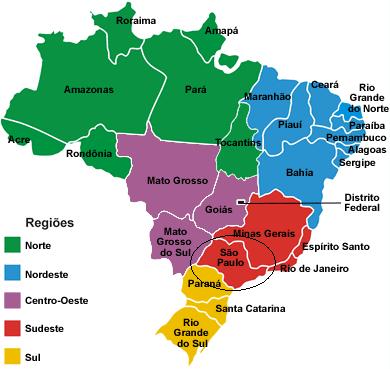 São Paulo is a state in Brazil, the largest country in South America in terms of area, population, and economy 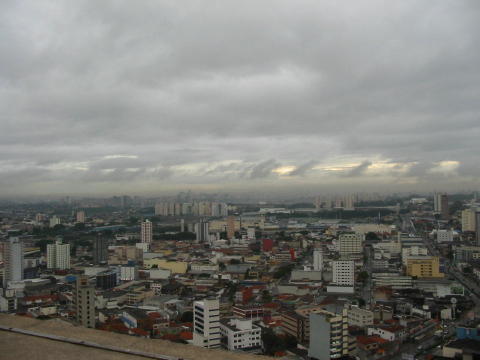 The industrial city of Osasco

After three Training sessions, two climactic Evangelistic Healing Services were held in the First Renewed Presbyterian Church of Osasco. The first service witnessed the Lord moving powerfully to heal through His newly-trained believers. Several people testified that God had healed them. Few of the testimonies were translated into English for me. But one middle-aged woman who had been deaf in one ear since she was eleven years old testified that the Lord had opened up that ear and she could hear. Another woman came up with bifocal eyeglasses that were somewhat thick. She waved them in the air and said that she didn’t need them anymore because the Lord had restored her eyesight! All the testimonies proved without a shadow of doubt that Jesus had authority to forgive sin and save us from condemnation in hell. 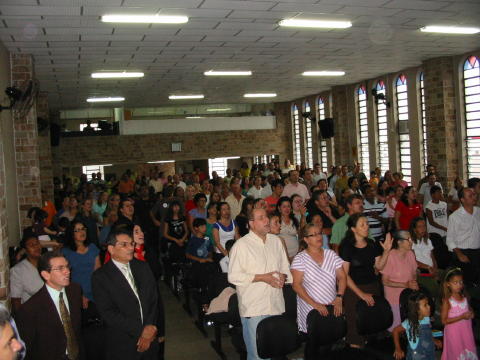 The second evangelistic healing service was equally exciting as the trained believers healed the sick to demonstrate that Jesus Christ is indeed the only way to the Father. We did this in accordance with John 14:11-12.

John 14:11 Believe me when I say that I am in the Father and the Father is in me; or at least believe on the evidence of the miracles themselves. 12 I tell you the truth, anyone who has faith in me will do what I have been doing. He will do even greater things than these, because I am going to the Father.

Several people testified that the Lord had healed them miraculously as the believers ministered to them at the front. The congregation rejoiced in the Lord. None of the testimonies were translated into English for me, but at the very end of the meeting a woman slowly approached the platform. I knew that she had something to say. Through tears she shared that she had lost 80% of her hearing in one ear due to irreversible nerve damage. After being ministered to at the front, she returned to her seat. She felt something happening in her ear, so she got up and began to walk back to the front. As she approached the front, she felt something very sharp like a needle being inserted into her ear. At that moment her hearing was restored. The Lord performed this miracle and many others last night to demonstrate that the only way to escape from condemnation in hell and into the Father’s house is to repent of sin and to follow Jesus Christ. When I challenged the people, some newcomers decided to repent and believe on Jesus. Others who already believed committed themselves to serving the Lord—to preach the gospel and to heal the sick (as Jesus commanded the seventy disciples in Luke 10:9) in the streets, in the marketplaces, in the parks and public places of Osasco.

The next morning I received a message from one of the pastors, who is a missionary from the United Kingdom. He wrote:

“It was a pleasure to meet you and I just praise God for the way he has used you whilst being here. We believe that you have been used to begin something wonderful in the life of our Church here, on Tuesday nights we intend to use what we have been taught to minister healing to the sick and deliverance to the demonized and we will invite those who participated in the “boot camp” to minister which will help so much. I will keep you updated on further miracles. May God continue to use you powerfully imparting to others what you have imparted to us.”

The town of Cornelio Procopio

After completing the Basic Training at the Visitation of God in Santa Cruz, I stopped for a day in Cornelio Procopio, a town situated between Santa Cruz and Maringá. There I held meetings in the morning and evening. The evening service was held in a fast-growing church which began eight years ago. There were pastors and servants of God from other churches present as well. I gave them a two-hour introduction to the Basic Training. Near the end of meeting I called for everyone who had pain in the bodies to come to the front to be healed by the believers according to what had just been taught from Scripture. I was surprised by how many people came forward. The congregation meets in what appears to be a fairly large converted warehouse. When the people lined up in front of the stage, they stretched all the way “from east to west” at the front of the spacious auditorium—it seemed to me nearly a hundred people had lined up.

I asked for an equal number of other believers to come forward to lay hands on them. After everyone was settled in place, together we began to exercise the authority over infirmities the Lord had given to us (Luke 9:1-2). After the first round, some were healed and came up to the stage to testify. Then after a second round of ministry, many more were healed and lined up on the stage to testify. After the third round of ministry, the remaining ones were apparently all healed as well and came up to the stage to give glory to the Lord. I could see no one left standing down at the front who had not yet been healed. Everyone, or at least it appeared that way, who had come forward to be healed had been healed.

The believers were greatly encouraged by what they had witnessed. Although the “Visitation of God” with Pastor Jonathan Ferreira’s team is not scheduled to take place in Cornelio Procopio until July 2009, it seems some believers are going to start visiting the homes of unbelievers to preach the gospel and heal the sick even now.

It was reported that during the Visitation of God conducted in this city in July 2009 as scheduled, about 300 infirm people were healed by the trained believers going from home to home over five afternoons. Moveover, the church which hosted the Visitation of God grew by 100% in one year following the event.

The modern city of Maringá in the state of Paraná

The Basic Training meetings here hosted by the Foursquare Church were successful. The Lord was faithful to confirm His word with many miraculous healings as the trained servants of God ministered to the infirm. He equipped them with a new weapon for proclaiming the gospel to the lost. I challenged them to take the gospel outside of the “church-box” to the streets, the marketplaces, and the homes of the city. Servants of God came from several different churches to attend the Training.

During the final meeting, an evangelistic healing service, several miraculous healings through the trained disciples confirmed to everyone that Jesus Christ is the only way to the Father. One woman came to the meeting with an painfully infected kidney—her one remaining kidney. As a trained sister laid hands on her, she felt as if a hand was reaching inside her and performing an operation. The pain disappeared and she testified that her endangered kidney was healed by the Lord. All the believers were greatly encouraged in the Lord, and were challenged to follow Him faithfully and to obey His commands. 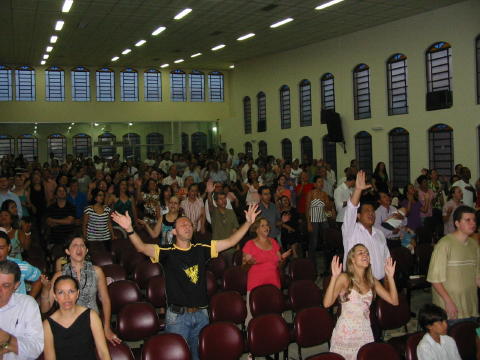