The Elijah Challenge in Langenhagen, Germany 2006

Back to Reports in Germany

The first day of equipping sessions with a small group of Vietnamese believers in Langenhagen (near Hannover) under the ministry of Pastor Dinh Le was fruitful. Wonderful miraculous healings took place as they laid hands on the infirm. It was eye-opening for these precious believers. Some very powerful laborers were raised up for the Kingdom.

One of the sisters came from as far away as Warsaw, Poland. Sometime in 2003 she received a copy of a videotape from the historic July 2003 Crusade in Saigon. She saw the miracles that took place and heard us preach the gospel. After viewing the videotape, she decided to follow Jesus Christ. When recently she heard that we were teaching in Germany, she came (see photo below). 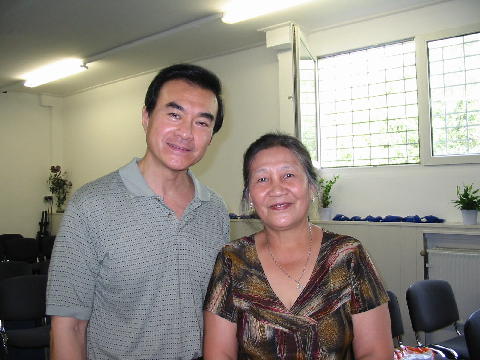 There was excitement at this morning’s session when a sister’s severely deficient hearing was restored as believers ministered to her. She dared not believe it at first, so she covered up her good ear and discovered she could hear everything very loud and clear through the bad one. She could hardly contain herself for her joy (see the photo below). The Lord transformed these believers through the teaching and equipping. They are ready for war, not just in the heavenlies, but here on earth by proclaiming the gospel to the lost everywhere with great power and boldness. They have become radicals for Jesus Christ. 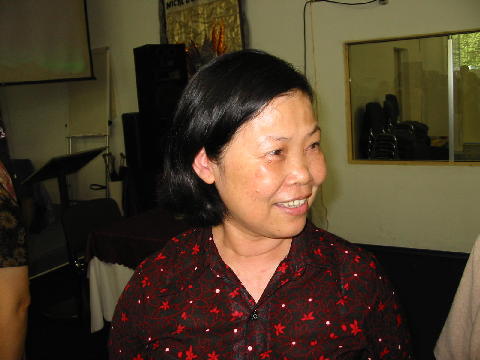 Over lunch before a sister sat down with us and shared about the impact of the July 2003 Crusade in Saigon. We had not known the extent of it. The Vietnamese believers here in Germany were exuberant when they received the VCD of the Crusade and witnessed the great thing the Lord had done in their home country. It was a turning point of the gospel in Vietnam. They made copies of the VCD and boldly distributed them to Buddhists and idol-worshippers (“My God is definitely bigger than your god.”) Some people decided to follow Jesus after viewing it, as did a woman living in Poland who came to attend our meetings here.

Meanwhile, things were happening in Vietnam as a result of the Crusade. Following that meeting there was a momentary surge in persecution; the authorities were upset at what had happened on their home turf under their very noses. A foreigner had come and preached at a big illegal underground meeting, and all kinds of unauthorized miraculous things were reported. But eventually when the believers in Hanoi—the very Communist north and the seat of power in Vietnam—heard of what the believers had done in Saigon way down south, they were emboldened to do the same thing themselves in defiance of the government authorities. Brazenly they held an open-air meeting in a park. The authorities were very displeased, but the believers would not be denied. Eventually the government capitulated and granted them the freedom to hold such meetings. There may be a saying that goes, “as Hanoi goes, so goes the rest of Vietnam.” Now that it’s legal in Hanoi, it’s also legal down south as well in Saigon. Apparently the believers in Saigon are now enjoying a measure of freedom to gather and worship they had not known before. It all started in July 2003 with that Crusade in Saigon. It had more impact than perhaps we will ever know this side of eternity.

Finally the Bride is being prepared and equipped for real war here on earth, not just in the heavenlies. Our domain is presently on earth.