Hosted by Rev. Victor Ehizunwelen of the Assemblies of God November 2009

Other events in Africa 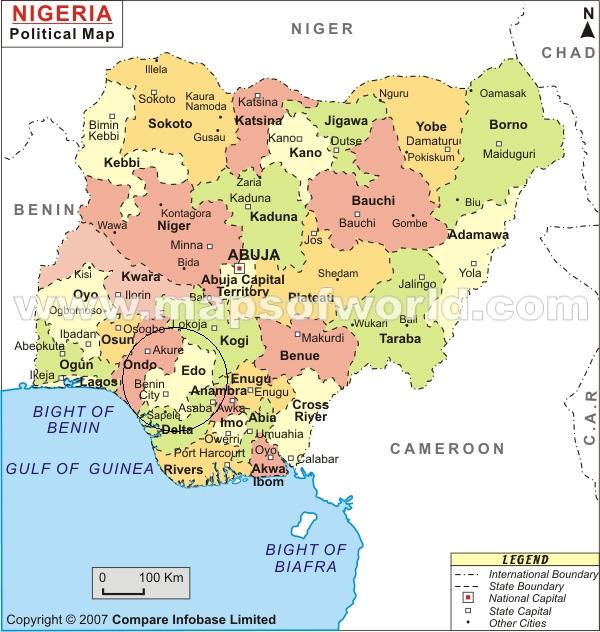 The town of Auchi is in Edo State (encircled)

“The Auchi Training started on the 5th of November and was held the at the Assemblies of God Church, one of the biggest churches in that community. There are more Musl__ms than Christians in Auchi, and they dominate in the community.

The event attracted about 520 believers and ministers. The teachings were inspiring and balanced and the presentation was well-developed. The people were glad to discover their authority to heal the sick; you could see the excitement on their faces. Some of them commented that the most surprising thing was how they could put it to work with instant results as the sick testified of God’s healing power.

From the first night to the third night the meetings were awesome. Over sixty people were healed of thir sickness and diseases. Among the testimonies were:

The testimonies were many and these are just a few.” 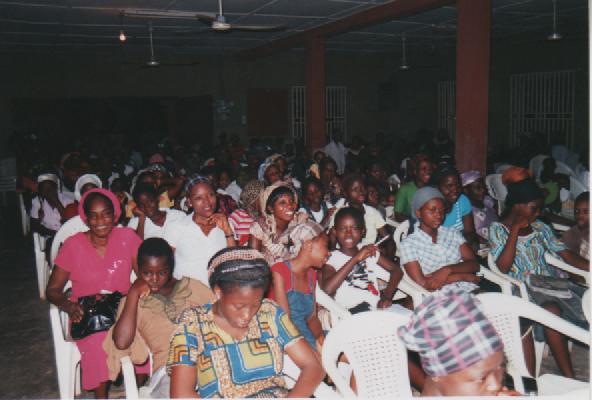 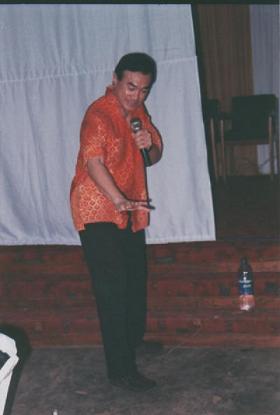 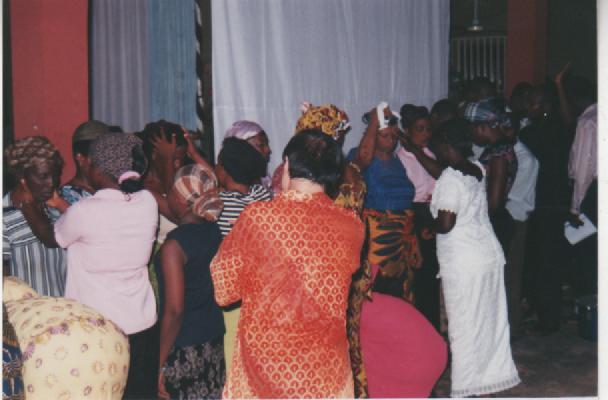 “Hands-on” practice for the disciples: laying hands on those with infirmities 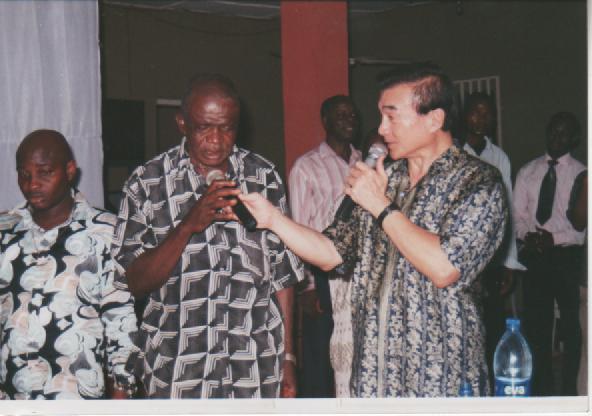 Above & below: People testify that the Lord has healed them 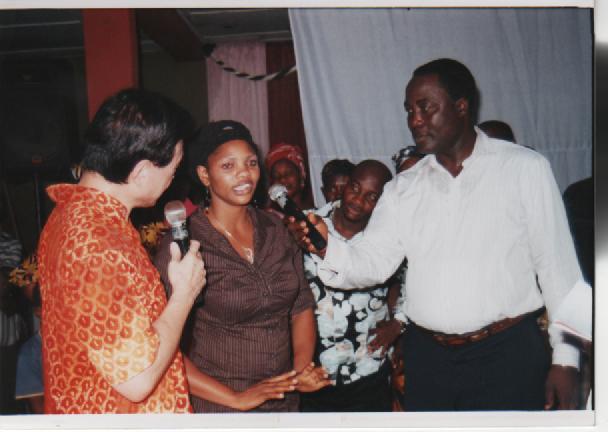 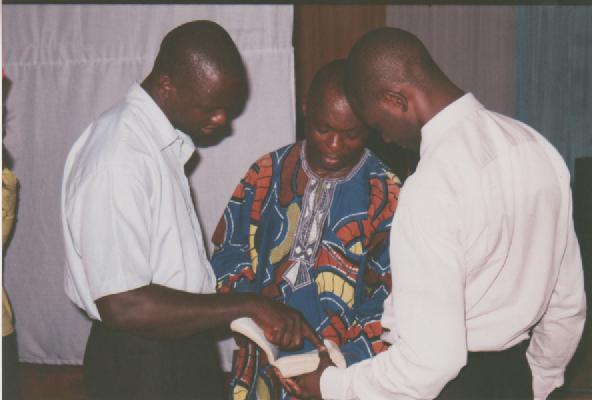 This eyesight of this gentleman (center) was restored

The physical conditions here in rural Auchi were daunting, but the Lord’s grace was more than sufficient. The two hundred plus believers were hungry, and they appeared to respond to the word of God.

I first laid the foundation for the teaching. When the spirit and power of Elijah is restored to the Church, like John the Baptist we will not preach the usual message of God’s blessing for us in this life on earth, but rather repentance—in order to make ready a people prepared for the Second Coming of the Messiah. The miraculous healings that we will perform in His name are for the purpose of bringing God’s people to repentance. Like the Church of Laodicea in Revelation 3, the Church in the west today is largely lukewarm and selfl-centered. The emphasis is on what can God do for us here on earth today—not on what we can do for God here earth in obedience to His holy commandments with an eye to our heavenly, eternal reward. This teaching originating in the west has spread to the south of Nigeria where Christianity generally dominates.

After that, we studied how Jesus healed the infirm in the gospels to bring the Israelites to repentance. We discerned the principles by which he ministered. At the end of the evening, we applied the principles that we had seen in the ministry of Jesus. Five people with pain in their bodies came forward, and all five were healed quickly as disciples who were called forward laid hands on them and did what Jesus did. There was rejoicing in the midst of the disciples as the Lord had confirmed the teaching for them. Despite the popularity of extreme prosperity teaching in Africa, there are disciples here who are seeking after God’s heart. It is now high time for the Church to repent of her self-centeredness, materialism, and lukewarmness and to obey the Lord’s commandments. Our deeds are not complete in the sight of God.

At the climactic evangelistic healing service on the final evening, many testified of being healed as the trained disciples laid hands on them. I told the people—mostly believers—to repent of sin, lukewarmness, fruitlessness, and self-centeredness. The predominant gospel here in Nigeria—imported unfortunately from the United States—is all about what God can do for us: He wants to bless us and make us happy and prosperous here on earth. This is the kind of message that “sells” and brings the people. The message which does not sell is that which emphasizes living a holy life pleasing to the Lord and bearing fruit for Him. When I challenged them to repent, many raised their hands.

My host pastor, Rev. Victor Ehizunwelen, was very pleased with the message and the teaching. He announced that he will send his people out to preach the gospel on the streets, in the marketplace, and from home to home. He wants to heal the sick and proclaim the gospel in unreached villages where most pastors do not want to go—there is no money or offerings in such poor places.

I would say that even though Christianity is quite widespread here in the south of Nigeria alongside with witchcraft, the health of the Church is grave. It’s all about money, especially among servants of God. When pastors here agree to participate in a seminar or a conference held by a foreign speaker, they all expect some kind of monetary benefit in return. Any offerings received from those who attend the Seminar or Crusade meetings will be divided up and taken by the local pastors. I was told that this practice was initiated by an internationally famous evangelist who has held some huge and well-publicized evangelistic Crusades in Africa. Now the local pastors expect the same treatment from every foreign speaker who comes, even if they are not well-funded.

The Church here must repent of her idolatry, just as Jesus warned the Church in Pergamum in Revelation 2.

Rev 2:14 Nevertheless, I have a few things against you: You have people there who hold to the teaching of Balaam, who taught Balak to entice the Israelites to sin by eating food sacrificed to idols and by committing sexual immorality. 15 Likewise you also have those who hold to the teaching of the Nicolaitans. 16 Repent therefore! Otherwise, I will soon come to you and will fight against them with the sword of my mouth.

Balaam, you will recall, was the prophet in Numbers who prophesied in return for generous pay. He was a hireling.

Matthew 7:22 Many will say to me on that day, ‘Lord, Lord, did we not prophesy in your name, and in your name drive out demons and perform many miracles?’ 23 Then I will tell them plainly, ‘I never knew you. Away from me, you evildoers!’