“We know that our God is a powerful God as He proved Himself by doing a miracle and a marvelous manifestation. This just happened yesterday evening.

Always we use to have the Friday evening fellowship in the home of one of our church believers who came to the Lord a year ago from Hinduism. Their Hindu relatives live in the city of Raipur (Madhya Pradesh).

In Raipur there was a young sister name Bhumica who was in her first year of her M.A. studies. She was attacked by a devil through witchcraft. So from time to time over the last five years, she would be possessed by the power of that devil. When it attacked she would lose consciousness and she would do what the devil spirit led her to do. In this way she suffered a lot by the power of the devil spirit. And Bhumica belongs to a Hindu family.

Their relatives also suffered for around ten years by the devil and they were delivered from it in Bhawanipatna. So they brought Bhumica to Bhawaniatna for deliverance from that bondage through our ministry. Last night we went to that house and saw her terrible condition.

I commanded the demon spirit to leave her in Jesus’ name. She fell down for a moment. After the demon left she was alright. Those who were there praised God for the wonderful miracle that took place. She also testified about the touch she had experienced. Praise the Lord.” 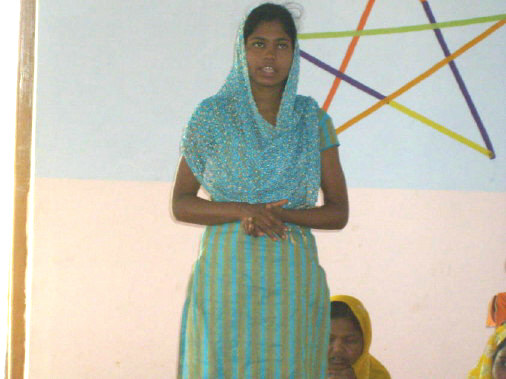 Another testimony in January

“After lunch one day a man named Suresh Chatria (a Hindu) rang our bell. When we opened the door we saw him and his mother with a child of 10 months old standing outside. When we saw them we were so surprised. They said that for three days this baby girl was having stomach pain, vomiting and severe fever.

They said, “we took her for medical help twice but the medicine did not work. After that we took her to a priest at the Hindu temple, it did not work out. He did some mantra-magic so that our baby can be healed. According to them this baby is attacked by a devil spirit.”

I told them to take her to our church and we would pray for her there. With a few brothers I went to our church. Before the ministry to her, the girl was almost about to die. We were also worried after seeing her in our church because her eyes were trembling.

The baby’s father and mother started to cry. But after we ministered to her, within a minute she was able to see and she was healed. We thank God that baby received back her life. Thanks to our great Healer. We all were there for forty five minutes.

Praise the Lord! Oh, what a wonderful God we serve. This Hindu family saw the mighty work of our Lord Jesus Christ. I believe certainly they will be attending our fellowship.”