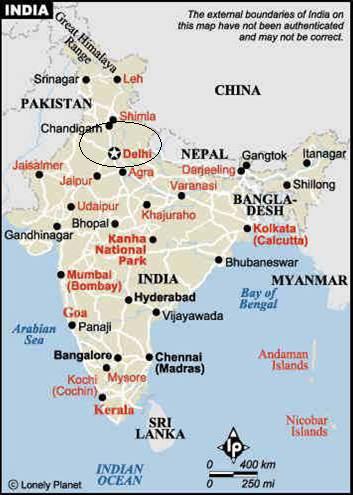 Budaun in Uttar Pradesh State is north of New Delhi

According to our host Pastor Simon Haqq, most of the people in Budaun are oppressed by demons. It’s a seat of Satan in India. Hundreds of demonized people come to Budaun from all around seeking treatment from well-known Musl__m sorcerers in town. 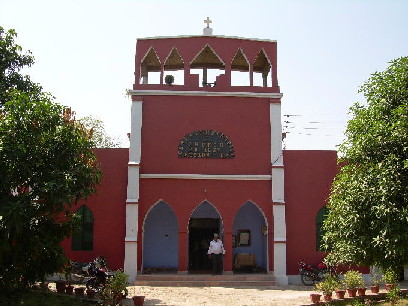 The equipping was held at the local Methodist Church. By the end of the first day many people with infirmities testified of being healed as the believers laid hands on them and exercised the authority given to them by Jesus Christ. When word got out about what was happening in the church that afternoon, more and more people came to be healed for the afternoon session. The Director of The Elijah Challenge Training Centre of North India at the time, was present. By the end of the day he was leading the healing ministry for the trainees.

The final training session took place on the third day. It was a most unusual session with so many healed of hearing and vision problems nearly effortlessly as the believers laid hands on them in Jesus’ name. The Lord’s grace was abundant. 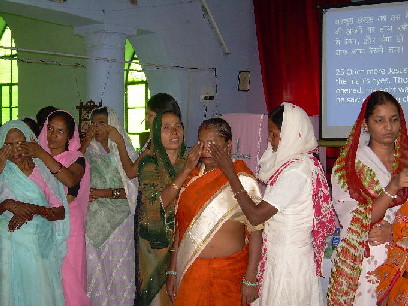 All testified of being healed of their various eye problems

At the initial open-air Evangelistic Healing Crusade I led off as I often do with Mark 2, arguing that Jesus’ authority to heal proves that He also has authority to forgive sin. Sincere Hindus are very concerned about the consequences of sin. That is why they go to the great trouble and expense of a pilgrimage to the Ganges River to wash away their sins as well as performing specific good deeds.

I asked the newly-trained believers to come forward to heal the sick in Jesus’ name to prove that our God is the one and only True God who created the heavens and the earth, and that Jesus can take us to Him through his death on the cross. When the people see the miracles performed in the name of Jesus Christ, they will know that only He can guarantee the forgiveness of their sins. The one who has the authority to heal physical and demonic infirmities (which ultimately are the consequence of sin) is the one who has the authority to forgive and remove sin itself. 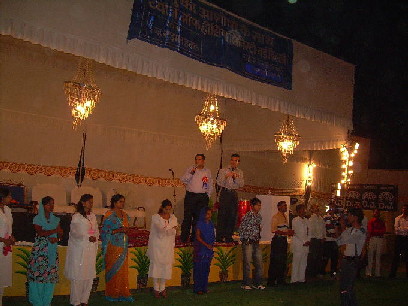 Trained believers called to the front to heal the sick 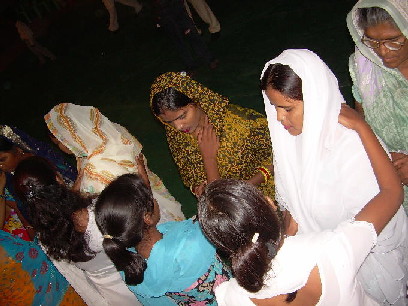 As mentioned earlier, people flock to Budaun by the hundreds seeking Musl__m sorcerers for relief from demonization. (At night, you can see them sleeping outdoors in a dark quarter of town called the “Devil’s Court.”) The sorcerers attempt to do this by offering appeasements and bribes to the demons. We had some demon-oppressed people come to the Crusade for deliverance. In particular there was a white-haired man whose wife had been severely demonized. Eventually she died from this affliction. The demons then went into his son, and in time the son also died. Finally the demons went into the father and tormented him. At the Crusade after trained believers authoritatively commanded the demons to leave him, he came up to the stage and testified with joy that he was free; he felt wonderful. He could actually feel the demons leaving when the brothers rebuked them and commanded them to go in Jesus’ name. (Unlike sorcerers who have no authority over demons and thus must offer sacrifices to them, believers have been given authority to cast them out forcibly.) The name of Jesus had marvelously set him free when spoken by those with mountain-moving faith. 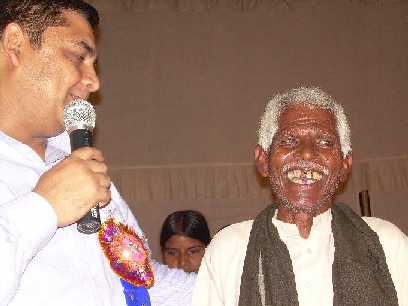 There were many other testimonies of healing as well. A woman who had been more-or-less deaf for years stormed up to the platform ahead of others waiting in line and with much gusto testified that she could hear perfectly. Several times the crowd erupted with applause hearing the testimonies. A young boy testified that six cysts on his arm had simply disappeared. The trained brethren were thrilled to witness how God had used them—nameless believers. (There was not a single superstar evangelist or specially-anointed servant of God present at the meeting.) Some of these faceless ones were members of the evangelical Methodist Church where the Seminar was held. Others came to be trained at the Seminar from outlying villages by horse-drawn and cattle-drawn carts.

When Pastor Simon Haqq invited people to follow Jesus, over 337 people surged forward to the front. Among them were Hindus. 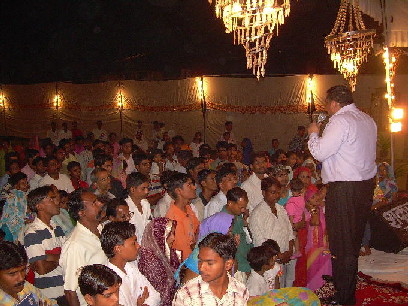 On the second night of the Crusade, God performed even more miracles through His servants than on the first evening. Through the healings He demonstrated that Jesus Christ is the only way to the Father according to John 14:6. This is a very effective and scriptural way of reaching Hindus.

John 14:6 Jesus answered, “I am the way and the truth and the life. No one comes to the Father except through me.”

John 14:11 “Believe me when I say that I am in the Father and the Father is in me; or at least believe on the evidence of the miracles themselves.”

Approximately 200 people, all of them Hindus and Musl__ms, came forward to accept Jesus as their only Savior after hearing the gospel and witnessing the confirming miraculous healings. 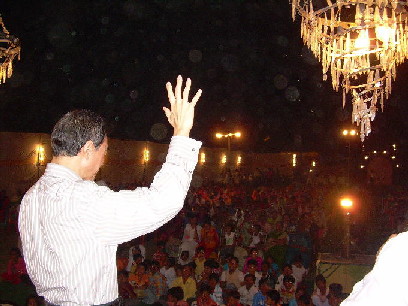 Preaching on the second evening 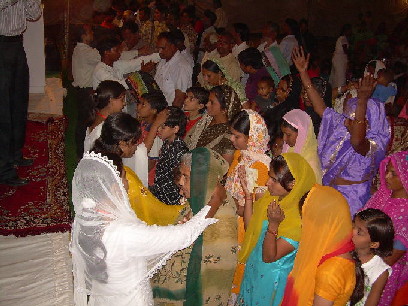 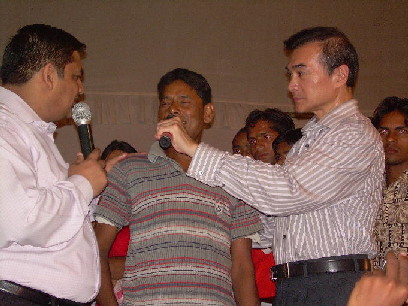 Above & below: many testify of being healed of infirmities 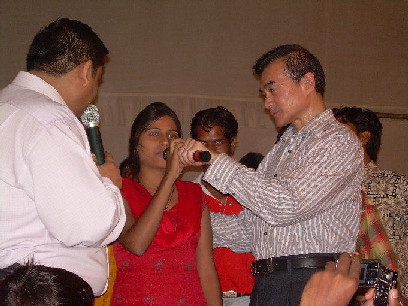 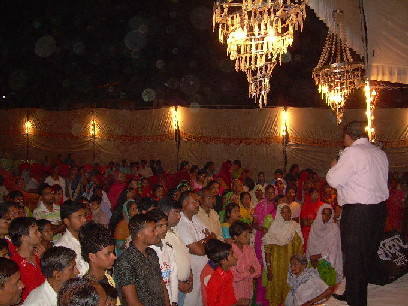 Simon plans to start five new churches out of these hundreds of new believers from Hindu and Musl__m backgrounds. It is good when new groups come into being not by people transferring from existing churches, but simply by believers obeying the command of our Lord Jesus Christ to heal the sick and preach the gospel to the lost.

Host Pastor Simon Haqq remarked that trained local believers could not find words to describe their feelings at witnessing the power and glory of God as they laid hands on the infirm. This is as Jesus intended—that anyone who believes in Him will do the works that He did (John 14:12). He is fulfilling His promise to His disciples during these last days.

The Third Evening of the Crusade

We had Host Pastor Simon Haqq preach at the final open-air meeting. Without me present, the believers I trained from Scripture ministered to the infirm on their own with great mountain-moving faith. Among many other miracles the Lord performed through them, a boy blind from birth could see. At the end of the evening, approximately another 300 souls came to faith in Jesus Christ. 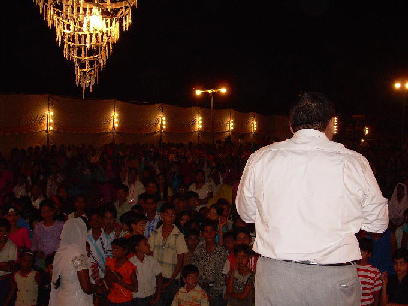 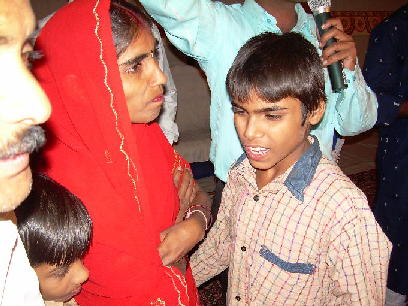 Boy born blind can see as trained believers minister to him