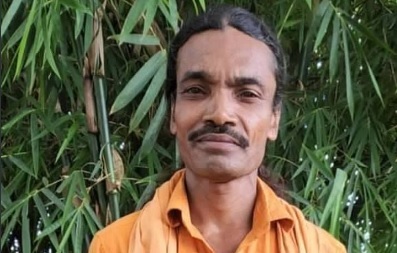 “Thank you very much for your intercessory and financial blessing. The Lord is doing such marvelous things in the ministry through our harvest workers. Recently I visited a few of our house churches in the field, and I myself was so blessed to hear their reports.”
.

“For years, a tribal Hindu priest named Sankar (above & below) served a Hindu deity. But his wife had a debilitating problem with her spine, rendering her unable to walk and get around. Sankar had taken her to see a doctor who prescribed medication for her. Even after taking it for a long time, she felt no change in her condition. Then Sankar took her to another hospital where she underwent expensive treatment, but again to no avail. Then our Elijah Challenge workers reached their village. They ministered to Sankar’s wife with power and authority in the name of our Messiah Jesus, and her spine was miraculously and wonderfully healed. Our workers preached the gospel to them, and both Sankar and his wife accepted Jesus as their only Lord and Savior.
.

.
After that, Sankar began to bring others in his village to faith in our Lord Jesus.”
. “A woman named Budhari Munda (below) had severe difficulty breathing. Precariously, from time to time she would simply stop breathing altogether. She became physically very weak. But then our Elijah Challenge workers came and ministered to her with the Lord’s supernatural power and authority. After that Budhari was able to breathe normally again. She believed and put her faith in Jesus as her Lord and Savior.”
. “After Ajita Bud (below) was bitten by a rabid dog, she began feeling unusual sensations in her body. Her speech and behavior totally changed, worrying her family. Then our Elijah Challenge workers came and ministered to her in the marvelous name of Jesus. Ajita was miraculously healed and her speech and actions returned to normal. She and her family accepted the gospel of Jesus Christ after it was shared with them.”
.

“A man named Kishore Munda (below) had been to the hospital a total of three times for treatment of fever and pain in his body. Despite taking the various medications prescribed for him each time, the fever and pain remained. Then, somehow, he came to hear about our Elijah Challenge workers, and so called them. They came and ministered to him in the wondrous name of our Lord Jesus. Kishore was miraculously healed, and after that accepted Jesus Christ as Lord and Savior.”
. “For a long time a young bachelor (below) named Badal had a stomach infection. When the severe pain hit him, he would take medicine regularly. But even after taking it for a long time, the pain would re-occur. Then our Elijah Challenge workers came and ministered to Badal with power and authority in Jesus’ name. He was then wonderfully healed. Badal then accepted Jesus.”
.