Family of man electrocuted by very high voltage thought he was going to die. BUT Jesus…! 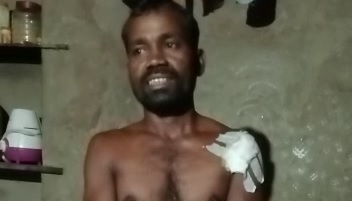 “Please pray for our believers to be bold witnesses during this time of persecution.”
.

“A suspended high-voltage cable fell on top of a man named Susanta Munda (above & below) while he was working in a muddy field. The very strong current coursed through Susanta’s body and he lost consciousness. His family thought that he was going to die. Our Elijah Challenge workers were summoned immediately. They came and with supernatural authority and power in the wondrous name of Jesus ministered to Susanta—whose condition was now critical. But within a few minutes he was wonderfully conscious again. Both Susanta and his family believed and accepted Jesus as their only Lord and Savior.”
.

“For three years Puche Tappo (below) suffered from a difficult case of asthma along with water in her lungs. During those years she had been treated by a doctor at the well-equipped city hospital, but even with admission to the hospital she did not recover. One Sunday she had an appointment to see her doctor, but instead she went and attended one of our Elijah Challenge house churches. There she was miraculously healed from both the asthma and the water in her lungs as our trained workers ministered to her in the marvelous name of our Lord Jesus. Puche and her family then accepted Him as their Lord and Savior.”
.

“A man named Madhab (below) had malaria for twenty days accompanied by a very high temperature. Consultation with a doctor followed by prescription medication failed to bring the fever down. Then our Elijah Challenge workers came and ministered to him in the name of our Messiah Jesus. Madhab was then miraculously healed. After that both he and his wife accepted Jesus Christ.”
.

“A few days after giving birth to a baby boy, Babita Bag (below) came down with a fever and a cold. While in bed in the middle of the night, her bed began to shake. She was of course very confused. The next day at night her bed began shaking again. Babita was very frightened, thinking that a demon was behind the terrifying shaking and that it might kill her and her baby. Her husband then called our Elijah Challenge workers who came and ministered to Babita in Jesus’ name. She was healed from the fever and the cold, and the demonic attacks at night ceased. Both Babita and her husband then believed and accepted Jesus as their only Lord and Savior.”
.

“For four months Anita’s (below) stomach was badly infected. At night she would cry out in pain. Her father took young Anita to see a doctor who prescribed medicine for her. But after a month there was still no relief for her. Then our Elijah Challenge workers came and ministered to her in the marvelous name of our Lord Jesus. At that point Anita was miraculously healed. Both of her parents then believed in Jesus as their Lord and Savior.”
.