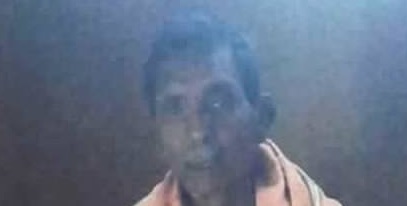 “Thank you so much for your intercessory and financial support. It is wonderful to witness outstanding miraculous healings and deliverances through our Elijah Challenge servants of God.”
.

“Temple priest Sadanada (above & below) had been performing his priestly duties smoothly. He was dedicated to his work, and capably served the people who came to the temple to worship and offer sacrifices. But one day Sadanada had a stroke and was paralyzed on one side of his body, affecting his hand and leg. Treatment from doctors involving a lot of prescription medication couldn’t help. Sadanada also used mantras and sacrificed animals, but also to no avail. After our Elijah Challenge workers ministered to him over a period of four days in the name of Jesus, he was miraculously healed from the paralysis. Sadanada the temple priest believed and accepted Jesus Christ as his only Lord and Savior.”
. “For two months elderly Kasturi (below) could not see due to deteriorating eyesight. After prescribing medicine for her, the doctor advised her to get fitted for eyeglasses. But when our Elijah Challenge workers ministered to her, her eyesight was restored and she could see normally without eyeglasses. Kasturi accepted Jesus.”
. “Young Ritesh (below) hadn’t been able to walk for four months. His father and mother took him to the hospital where medicine was prescribed for him. But after taking it he still wasn’t able to walk. His parents were very puzzled and upset at their little boy’s condition. After Ritesh’s father heard about The Elijah Challenge, he asked for help. Our workers then went and ministered to the child in Jesus’ name. The Lord healed him and he was able to walk again. His grateful parents accepted Jesus.”
. “Saroj Munda (below) was demonized, acting like a monkey jumping on and climbing up trees. He would run here and there, and his poor family couldn’t control him. A sorcerer was summoned and performed mantras. But the demon would not listen to him. Instead, Saroj pushed him and hopped away. Then our Elijah Challenge workers came and commanded the demon to leave Saroj in the powerful name of Jesus Christ. The demon obeyed and left. Saroj’s entire family was very thankful and accepted the Lord.”
. “For a long time Parwati (below) had terrible migraines. When the pain came, she could only weep helplessly. For almost her entire life she had taken medication to fight off the barrages of pain when they struck. But nothing really worked, not even ayurvedic medicine. Finally her father called our Elijah Challenge workers to come minister to her. Wonderfully, the Lord completely healed her from the migraines.”
.