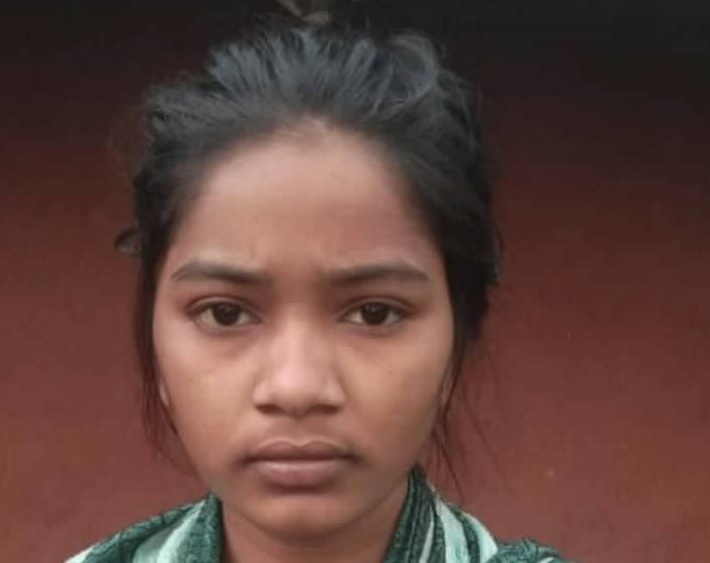 “I rejoice to receive reports from our harvest workers reaching out to villages in the interior. Listening to them share how the Lord is using them to reach such villages—especially during this pandemic shutdown—give me so much joy.”
.

“In a village known as Thuapadar lived a sorcerer whose daughter (above & below) was under demonic attack. Due to a conflict he was having with other sorcerers, they had sent demons to afflict his daughter. Since he himself knew the trade, he took steps to deliver his daughter from the attacks. But whatever he tried failed. Day by day her condition worsened. She stopped eating and sleeping. Finally he came to the realization that sorcery, even from another witchdoctor, could not help his daughter. So in desperation he summoned our Elijah Challenge workers. When they came and ministered to the girl, she was finally set free from the attack. The sorcerer and his wife accepted Jesus.”
. “Dirilila (below) lived in the village of Raghuguda and had breast cancer. She had been treated at a hospital several times and was taking prescription drugs regularly, but the cancer persisted. A very highly-respected doctor seeing her condition told her that she needed an operation to remove the tumor as soon as possible. While she was in preparation for the surgery, our Elijah Challenge workers arrived in Raghuguda. As they ministered to her in the name of Jesus Christ, the tumor miraculously disappeared. Dirilila’s family and relatives all believed in Jesus and accepted him as their Savior.’
. “For a year young Sarojini (below) had a mental disorder. Over and over her parents had taken her to a local hospital for treatment and medication, but there was no change in her dire condition. They then called for sorcerers who offered animal sacrifices and mantras for her, but poor Sarojini’s mind was untreatable. Her parents were forced to keep her locked away in rooms in their house. Finally they called for our Elijah Challenge workers who ministered to her in Jesus’ name over two days. Sarojini was restored to her right mind. Her parents then accepted Jesus as the only Lord and Savior.”
. “Namita (below) lived in the village of Asada and suffered from painful burning in her lower stomach. Neither allopathic nor ayurvedic medicine helped. The moment our Elijah Challenge workers ministered to her in Jesus’ name, she felt a very powerful supernatural touch in her body. The pain and burning sensation vanished immediately. Namita believed and accepted Jesus Christ as her Lord and Savior.”
. “Bandhaba (below), a young man living in the village of Kamarguda, had chest pain for two years following an accident which severely injured his chest. He had gone to the hospital and had taken medication for three months. But the pain persisted. Upon the doctor’s advice a scan was done on his chest, but nothing showed up on the scan. After that Bandhaba consulted with a sorcerer who gave him medicine to take, but again to no avail. When our Elijah Challenge workers ministered to him, his chest was miraculously healed. The young man accepted Jesus.”
.