SORCERER supernaturally healed on deathbed turns to Jesus, wants to be a witness for the Lord 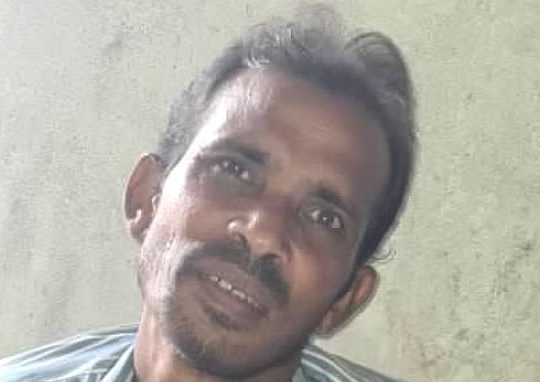 “Greetings to you in Jesus’ precious name! Thank you so much for your intercessory and financial support for the ministry. Last month we visited a few of our harvest fields where things are going well even during this pandemic. At one of the hotels where we stayed, the manager asked to see our vaccination certificates, but we didn’t have any. In India there have been reports of many people getting sick or even dying after receiving the vaccine, so we had not yet received it. For the sake of the gospel, however, we decided to receive the vaccine so that we could be free to travel. Praise the Lord after taking the first vaccine we are both doing well.”
.

“Mohan Dibakar (above & below: before & after) was a well-known sorcerer and communicator whose profession involved performing mantras for the sick and giving them medicine. But his witchcraft could not help him during his bout with a severe illness which threatened to end his life. Then in May 2021 he experienced a great miracle whereby he was supernaturally healed by the Lord. Through this miracle Mohan was completely changed, both physically and mentally. He now wants to be a witness for Jesus Christ.”
. “Snigdha (below) was a Brahmin —the most respected social class in India among the Hindus. She had suffered from hemorrhoids for five long months. For two months she had been treated by a medical specialist with medication, but the pain actually worsened. After hearing about one of our house churches where people had been miraculously healed, she went to receive ministry for her hemorrhoids. There our Elijah Challenge workers ministered to her in the name of Jesus Christ. She was miraculously healed. Grateful Snigdha accepted Jesus as her only Lord and Savior, and is now attending that house church.”
. “For fifteen days Madhuri (below) had a fever, cough, and a cold after contracting COVID-19. Medicine did not bring down her temperature. Finally her father called for our harvest workers. They went to their home where Madhuri was supernaturally healed from COVID as they ministered to her in Jesus’ name. The entire family then put their faith in Jesus as Lord and Savior.”
. “Elderly Pramila (below) had blood spurting out from her nose. The local village doctor had been treating her with drugs, and she had been taking allopathic medicine. As the bleeding continued unabated Pramila got weaker and weaker — an unwelcome condition for someone of her age. But it happened that our Elijah Challenge workers were ministering to some sick people in their village. They stopped by her home and prayed over her in Jesus’ wonderful name. The bleeding stopped and she was healed. Pramila then believed in the Lord and accepted Jesus Christ.”
. “A man named Sunil Naik (below) was demon-possessed for two months. Without telling anyone he would take off running into the jungle. From time to time he would even hit his family members. But it happened that one of our believing families lived near his family. They shared with Sunil’s family about our harvest workers, whom they then called for help. After arriving at the home, they commanded the demon to leave Sunil in Jesus’ name. The demon left and Sunil was set free from the two months of torment. He accepted Jesus Christ.”
. ‘Kamal (below) was sick with a very high fever and pain throughout his body. A COVID-19 test came out positive and he was overcome by fear. For eight days he took prescription medicine, but he didn’t recover. Then our Elijah Challenge workers ministered to him in the marvelous name of Jesus Christ. Kamal was miraculously healed and accepted Jesus as his only Lord and Savior.”
.