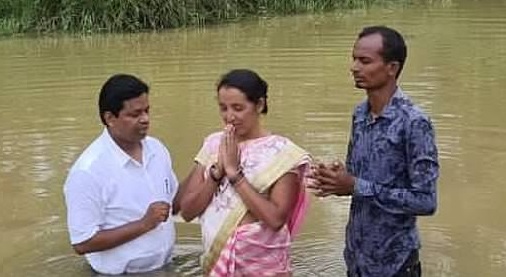 “Last June 2020 we posted the testimony of Mrs. Mamata Pradhan, a high caste Hindu woman who along with her husband was baptized after her miraculous deliverance from horrid demonization. Recently Mamata was staying with relatives to attend ceremonies. As she was preparing for bed one night some of her relatives saw her praying to the Lord. The women asked her to pray for them. She replied that if they believed she could because she was a new creation in Christ. Mamata then ministered to them one by one in Jesus’ name. Early the next morning her relatives came to her and testified that they had slept well and had been healed. They asked her what had taken place. She then shared the gospel of Jesus Christ with them. Praise the Lord!”
.

“A young lady named Dipa (below) resides in a village known as Lakbahali. For the past year she suffered from a mental disorder. Her parents had taken her to a doctor, but medical treatment didn’t help. So they took her to be treated by sorcerers. But even after a month of their mantras and sacrifices, Dipa was still not well. When our Elijah Challenge workers ministered to her in the name of Jesus Christ, her mind was wonderfully restored. Dipa and her parents accepted Jesus as their only Lord and Savior.”
. “Young Anita (below), living in the village of Thungpadar, suffered from bleeding which left her so weak that she would just collapse on the floor from time to time. Occasionally she would receive a blood transfusion. Medicine didn’t stop the bleeding. Since she had no father to provide financial support, her family could not afford more advanced treatment. But after our Elijah Challenge workers ministered to her, Anita was totally healed. She along with her mother accepted Jesus.”
. “For two long years, elderly Balaji (below) living in the village of Jampali was tormented by very painful hemorrhoids. Prescription medication and other treatments failed to bring relief. But Balaji was miraculously set free from the pain and hemorrhoids when our workers ministered to him. He accepted Jesus.”
. “Young Chatria (below) had a serious case of jaundice for months. He had been admitted to a hospital, but when the jaundice stubbornly persisted he went home. After our workers ministered to him in Jesus’ name, Chatria’s jaundice disappeared. He accepted Jesus.”
. “For a long time, Thabir (below) living in the village of Gandhichak suffered from arthritis. Getting weaker day by day, he had difficulty walking. Regular allopathic medicine didn’t help, and so he tried several doses of ayurvedic medicine instead. That also failed. Finally our Elijah Challenge workers ministered to him in Jesus’ name. The Lord healed him, and he believed.”
.