Quetta, Pakistan during the US Invasion of Afghanistan 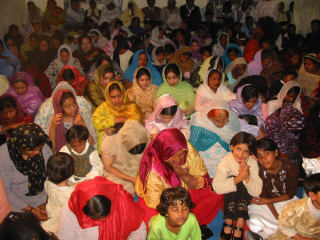 Basic Training for believers in Quetta

We began with two days of our Basic Training to teach the Pakistani believers how to heal the sick as miraculous signs for unbelievers in the context of preaching the gospel. Afterwards we had two evenings of evangelistic Crusades. The final meeting on April 8th was marvelous as the Lord moved with power. I preached from John 9, where Jesus healed a man born blind. Because his physical eyes were opened, the man believed in the Lord, and his spiritual eyes were opened to the realm of the Kingdom of God. With the Holy Spirit’s boldness I proclaimed that Jesus would open the eyes of the physically blind and visually challenged at the meeting to prove that He could also do the far greater miracle of opening up spiritually blind eyes to God’s existence and saving grace. 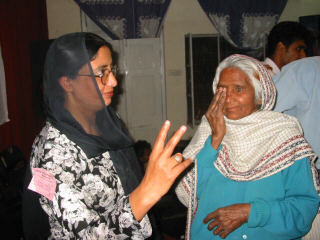 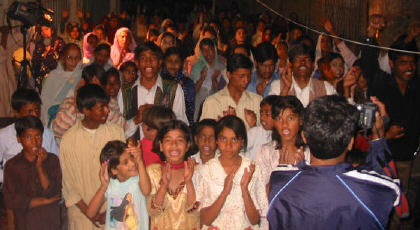 I asked those with eyesight and hearing problems to come forward to receive their healing. Then the believers who had been trained in the Healing Encounter stepped up to minister to them. It was wonderful…God’s power to heal flowed through the believers. Perhaps the most memorable miracle of the evening was a six-year-old boy who had been born blind in his left eye. A young man who had been a believer for one year and had just attended the Healing Encounter, laid hands on him in Jesus’ name. The little boy was healed and could see with the eye, demonstrating it in front of the delighted crowd! With his good right eye covered, he reached out his hand and without any hesitation at all touched the interviewer’s ear and nose when instructed to do so. (photo below) 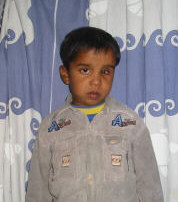 After all the healing testimonies of eyesight and hearing infirmities, I challenged the people with the proof that the Lord had just given concerning His identity as the Light of the world, the only one who could save them from sin and spiritual darkness.

Hands went up everywhere to accept Jesus as their Lord and Savior!

But the best is yet to come. My host pastor Oliver Zia and his workers are now immeasurably emboldened and plan to continue such outreaches on their own. They don’t need a foreign evangelist. After all, they were the ones who healed the sick at the gospel meetings, not me.

It was so wonderful to hear those thrilling and bombastic testimonies. The Lord is always faithful and those who stick on to their callings and visions they manifest His Glory, and you are one of them. I will not ever forget your valuable contributions in our ministry.

The spiritual development of your ministry is a fruit of your commitment and unstopped struggle. May Lord bless end enhance you more and more.”