Many times the legion of demons would laugh and challenge Sonali’s parents to “bring someone with more power!” 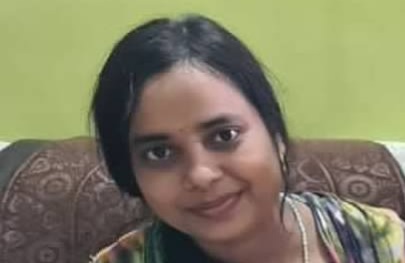 “Greetings to you in Jesus’ precious name! Thank you so much for your intercessory and financial support. Please continue to uphold us in your daily prayers as we are often dealing with demon-possessed people. It’s difficult to believe that in this modern technological age a legion of demons could attack a highly-educated person.

Sonali (above & below) lives in Kendrapada, a town over 500 kilometers by bus from my town of Bhawanipatna. She is a government teacher with M.Sc. and B.Ed. degrees, and her husband was a college lecturer. Last January (2020), her husband was killed in a tragic accident.

In February she gave birth to baby boy. The following month on the 24th of March she took her baby to a well-known Hindu temple. After returning home a legion of demons possessed Sonali. Most of the time she was out of her mind, and could not even recognize her baby. In the beginning her parents sought the help of a local sorcerer, but he was unable to do anything.
. .
Sonali’s father then summoned a more powerful sorcerer. He came, but the demons shouted and laughed at them saying, “bring a sorcerer who has more power than me!”

In the meantime the demons began to attack the baby every midnight, making him do strange things.

After her family failed to find help in their home district, they took her one by one to ten other districts like Cuttack, Bhadrak, Mayurbhajn, Nayagarh, Baleswore, and Khorda seeking relief for Sonali. In each district they would stay from ten to twelve days, during each stay taking Sonali to the well-known Hindu temples in the district. None of the temple priests there could help her. They spent over four lakhs (US$5,500-$6,000) for treatment. But in each place the demons would challenge her parents through Sonali to “bring someone with more power than me.”

Ten to twelve days ago the demons told Sonali’s parents to take her to Bhawanipatna where I and my wife live. Her parents thought that perhaps there the demons might leave her. Without knowing anyone here, they came and stayed in a local hotel. They took her to several temples in our town, each time offering money, chickens and fulfilling the requirements imposed on them by the priests. But Sonali was not set free. One of the priests said that they could not do anything for her. They were now deep in distress.

During their stay in the hotel they hired an auto rickshaw driver to take them to a temple. On the way they shared with the driver what they had been going through with Sonali. The driver told them that later in the evening he would take them to see me. He had witnessed his daughter delivered from demonization after I had ministered to her.

That evening he brought Sonali and her parents to our home. I ministered to her, rebuking the demon in the powerful name of the Lord Jesus Christ. At that moment the demons began to cry, saying that they will leave her. After that her parents shared with us that in the past, the demons would always refuse to leave and challenge us to bring someone with more power.
. .
The next day to our surprise the demons attacked Sonali again. They were challenging me to a fight. It lasted a while, but I continued rebuking the demons in Jesus’ name with his unmatchable authority until they left. One after another the demons left Sonali, and she was completely delivered by the Lord.
.

Witnessing such an extraordinary deliverance from the Lord, the family accepted Jesus Christ.

I asked Sonali if she knew of any servants of God or churches in her area. She had never seen a church and didn’t know at servants of God in Kendrapada. Many people there are suffering desperately just like Sonali. We must send Elijah Challenge-trained harvest workers to her area. Sonali at left and her mother at right