Hindu woman testifies in video after her miraculous healing from severe stroke and paralysis. Her family then accepted Jesus. 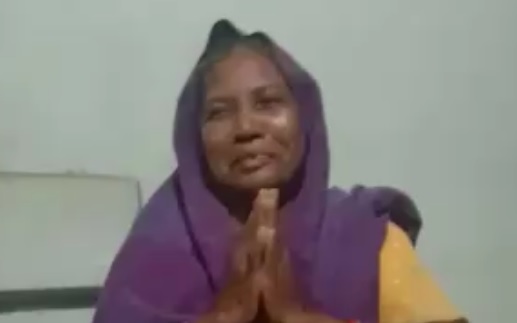 “Thank you so much for your intercessory and financial support for the ministry here in India. The Lord is doing great things through our harvest workers to reach the unreached.”
.

“For four to five years a woman named Sila (above & below) had been paralyzed and bedridden following a severe stroke. A long stay in the hospital along with treatment proved fruitless. After spending so much money on her treatment, Sila was left discouraged and without hope. Somehow, she heard about our Elijah Challenge workers and asked them to come to her home. Over a period of five days our workers ministered to her with supernatural power and authority in the name of our Messiah Jesus. Each day saw Sila’s condition improving. Finally after the five days she was completely healed. After the gospel was shared with them, Sila and her entire family accepted Jesus as their only Lord and Savior.”
.

“A Hindu woman (below) was paralyzed, unable to stand, to walk, or even to move her hands. One of our Elijah Challenge workers ministered to her in the name of our Messiah Jesus, and she was wondrously healed. She then put her faith in Jesus as her only Lord and Savior.”
.

“Srimati Tappo (below) underwent unusually excruciating pain prior to delivering her baby. At the hospital she was given a prescription drug for the pain, but instead it worsened. The doctor told the couple that she would have to undergo a c-section, but the procedure would be very expensive. Her husband then contacted our Elijah Challenge workers who went to the hospital. There they prayed and ministered to her in the precious name of our Messiah Jesus. After that Srimati give birth normally—something both she and her doctor could not fathom. She and her husband happily gave their lives to Jesus and accepted Him.”
.

“A young man named Ashok (below) had a terrible stomach infection. Due to the severe pain, he could no longer eat and drink. After treatment at a local hospital failed to alleviate his condition, he was taken from the hospital directly to a Hindu temple where he was kept for a few days but with no improvement. From the temple Ashok was taken to one of our Elijah Challenge house churches where our workers ministered to him in the wondrous name of Jesus. Ashok was totally and miraculously healed. His family then accepted Jesus Christ.”
.

“Young Sumit (below) had a bad fever accompanied by coughing. After around twenty days of medical treatment, his temperature had not gone down. Then our Elijah Challenge workers came and ministered to him in Jesus’ name. The fever left and Sumit stopped coughing. His father and mother believed, and accepted Jesus as Lord and Savior.”
.

“For two months Patnaik (below) had been afflicted with severe arthritis. His condition was so serious that he could not even get up from bed. A hospital stay failed to help him. Then our Elijah Challenge workers came and ministered to him in the marvelous name of the Messiah Jesus. Patnaik was wonderfully healed. After that he and his family put their faith in Jesus as their only Lord and Savior.”
.