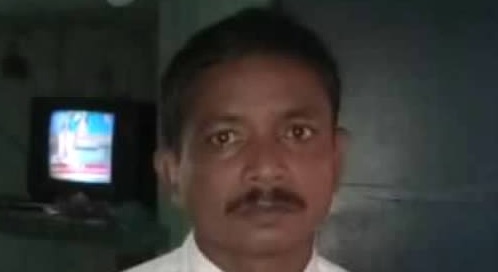 “Thank you so much for your prayer and financial support for the extension of His kingdom here in India. Last week our believer Sister Purnima Sabitri (Woman who accepted Christ 5 months ago has reached 3 villages in strict Hindu area) was targeted by a radical Hindu group. After getting drunk, a group of them went to her house and broke down her front door. They shouted that she would not get any provision from the government and would not get any water from the local well. I have sent some of our senior believers and workers to encourage her not to be afraid. Please pray for her…she needs to be strong since the Lord is using her to reach Hindus with His power and authority.”

“A man named Bholanath (above & below) had already tested positive for COVID-19. A fever raged in him racking his entire body with pain. His relatives were extremely concerned when COVID drugs could not bring down the fever. When our Elijah Challenge workers ministered to Bholanath in the powerful name of Jesus Christ, he was miraculously healed. He and his relatives all accepted Jesus as their only Lord and Savior.”
. “Gurubari (below), a mother with children, tested positive with COVID. Then a few days later she came down with typhoid fever as well. The two diseases totally drained her of strength. She took medicine, but it didn’t help. Then our Elijah Challenge workers ministered to her, and the Lord healed her supernaturally. Along with her thankful family, Gurubari accepted Jesus.”
. “Debanad Nayak (below) had tested positive for COVID, and also had very high blood sugar. As his condition worsened he stopped eating, surviving only on milk. Then his family heard about our workers and summoned them. After they ministered to him with the Lord’s supernatural power and authority, Debanad was healed. He put his faith in Jesus and accepted Him as Lord and Savior.”
.

“Ashok (below) also had COVID and was being treated with medication, but his condition was not improving. In his village many people had already died from COVID, and fear of dying had taken over his mind. Then our Elijah Challenge workers came and ministered to him in Jesus’ name. He was miraculously healed and delivered from death. Afterwards Ashok accepted Jesus Christ.”
. “A man named Birendra Negi (below) was losing his memory. He was no longer aware of what was going on around him, of what he was doing and where he was going. He had already been taken to various temples and to sorcerers, but nothing helped. Then after his family heard that only through Jesus Christ could he be healed, they contacted our Elijah Challenge workers. They went to Birendra’s home and ministered to him in Jesus’ name. His mind was then miraculously restored. He then believed and thankfully received Jesus as Lord and Savior. Birendra is now attending one of our house churches.”
. “A demon had attacked the right leg of a woman named Santi Rohidas (below), causing severe pain and swelling. No longer able even to walk, she was helpless even to do daily chores. But she gave thanks to God after our Elijah Challenge workers ministered healing and deliverance to her in the name of Jesus Christ. She then believed and accepted Jesus as her only Lord and Savior.”
.