The Richmond Community Meeting Room was packed with people lining the walls. Many were Vietnamese Buddhists and idol-worshippers from the surrounding tall apartment buildings drawn by the hope of healing for their physical infirmities.

I first made the case that Jesus’ ability to heal disease was proof of his authority to forgive sin as well. This is an important consideration to many Vietnamese (and Asian Buddhists in general) whose religion offers little hope of salvation. They only know that when they die they will go down to the underworld to be tormented by the god of the underworld.

Then I asked Jesus to heal the infirm. After prayer, I led the believers who were present in exercising our authority over disease and demons (according to Luke 9:1-2 and Luke 10:1, 9) in the context of proclaiming the Kingdom of God to the lost. Many, mostly unbelievers, were healed immediately at that time and came forward to testify. Among them…one cancer survivor who had lost her hearing in one ear testified that her hearing had been restored. Another woman said that her significant hearing loss in both ears had been reversed and she could hear clearly.

One elderly woman who had received healing prayer at the Crusade meeting at the much larger Springvale Town Hall the evening before testified that she was able to sleep that evening after having suffered through fifty years of sleeplessness! There were several other testimonies of healing as well.

After the testimonies, I immediately declared that the miracles proved that Jesus also had authority to deal with a far weightier issue—the forgiveness of sin. His power to heal proved that He also had authority to forgive sin, which is the root cause of disease. When I gave the altar call for salvation, sixteen precious Buddhists souls came forward to follow Jesus! This is an exceptional result for ministry to gospel-resistant Vietnamese in a relatively small meeting. They had heard the proclamation of the gospel and seen the confirming miracles.

Afterwards, Pastor Quang led his team of trained leaders to minister to those who had not yet been healed. As Lucille and I sat down to rest we saw them minister with unusual boldness and power. More miracles of healing took place through them. While this was happening, hardly anyone came to us for healing ministry. This in itself is highly significant—usually the sick line up to have us minister to them instead of the local leaders. But Pastor Quang and his team ministered with such authority and effectiveness that hardly anyone bothered to come to us! This means that the impartation has been successful, and the gospel will be preached with power by Pastor Quang’s non-charismatic, evangelical church after we leave. And that is the reason why the Lord sent us here.

We are grateful to the Lord for having sharpened our tools while in Melbourne. We have learned how to conduct the meetings more effectively and efficiently than we did in our first three stops in Australia. We began in Perth. It was a bit better in Sydney, and then still more effective in Brisbane. In Melbourne we have seen the best yet. 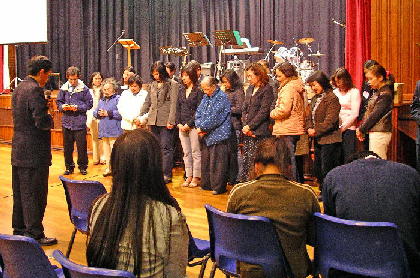