Praise the Lord for the wonderful victory we witnessed for the Kingdom of God this evening at the Springvale Town Hall! The Crusade was hosted by the Evangelical Vietnamese Church in Australia.

After presenting the claims of Jesus Christ according to John 14:6-7, we asked the Father to prove that Jesus was indeed His Son and the only way to Him. The evidence would be the miraculous healings done in His name. I asked those with infirmities to lay hands on themselves while all the believers exercised their authority by commanding them to leave in Jesus’ name. Many were healed and came forward to give their testimonies. Immediately after the testimonies, I gave an altar call to receive Christ as Lord and Savior. After healing the gospel shared in a straightforward manner and seeing the confirming miracles, people began to come forward to believe in Jesus. I do not have the numbers, but it was a good and satisfying harvest! Buddhists are usually gospel-resistant and difficult to bring to faith in Christ.

Then I had the trained believers come forward to lay hands on those who still needed healing, and more miracles took place. A woman who had suffered from a stroke had not been able to walk in a year and was brought to the meeting in a wheelchair. As three brothers ministered to her, she was eventually able to get up out of the wheelchair and walk by herself! One brother who was totally deaf in one ear because of a virus infection began to hear again through that ear. 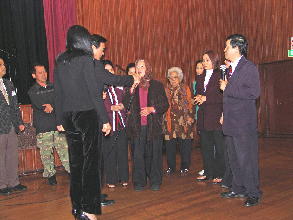 People who were healed testifying