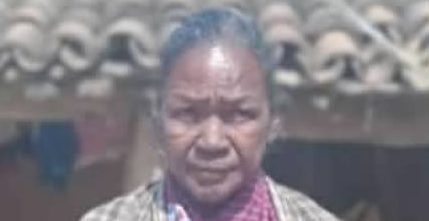 “Greetings to you in Jesus’ precious name. Thank you so much for your intercessory prayer and financial support. Our ministry is going on very smoothly by the grace of God.”

Here are a few selected reports from among many…”

“Monika Hemram (above & below) is an elderly woman from the village of Tentulikhunti who had not been able to walk for three years due to severe arthritis. She had taken prescription medicine from the hospital as well as ayurvedic medicine from a village doctor. But she stopped taking them after nothing worked. Then her children heard about ministry of The Elijah Challenge, and called our workers. Monika was miraculously healed from arthritis and able to walk after they ministered to her in Jesus’ name. The family accepted Jesus Christ.”
. “In a village called Telendihi lived a man named Indra Pradhan (below) who was paralyzed for a long time following a stroke. He had spent a lot of money for treatment in different hospitals, but it was all for naught. Then our Elijah Challenge workers came and ministered to him for a few days. The Lord healed him, and Indra is now able to walk. He and his family put their faith in Jesus Christ as their only Lord and Savior.”
. “For five years, Tidu (below) suffered from a migraine headache. He had spent a lot of money on treatment at various hospitals and from doctors, even selling his land to pay for the treatment. But the headache persisted. When our Elijah Challenge workers ministered to him, the migraine vanished. Tidu gratefully accepted Jesus as his only Lord and Savior.”
. ”For a long time Ulin Munda (below) who lived in the village of Gadiajor enjoyed alcohol. But finally his stomach became infected, causing Ulin much pain. Prescription medicine from a doctor didn’t help. Then he contacted our Elijah Challenge workers who went to his home to minister to him in Jesus’ name. Ulin was miraculously healed from the infection, and accepted Christ.”
. “A woman named Surama Naik (below) lived in a village called Mayabha. One day her leg swelled up suddenly and started hurting. She went to a doctor who took x-rays, but he saw no reason for her condition. For a month Surama suffered in pain. Then her family heard about our Elijah Challenge workers. They were called to come and help. They came to Surama’s home and ministered to her in Jesus’ powerful name. She was completely healed, and both she and her husband accepted Jesus. A new house church has started up in their home.”
.