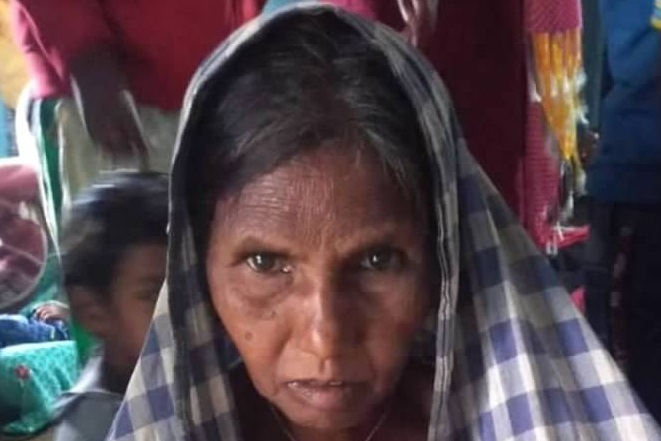 “Thank you so much for your intercessory and financial support for the extension of His kingdom in India. With the omicron variant the situation with COVID-19 has become very severe again in India. Even though the symptoms are mild, omicron spreads very fast. Please pray for us.”
.

A few selected reports among many…

“For the past few years, elderly Rajal (above & below) was mentally disordered and very likely had dementia—an incurable condition afflicting senior citizens. When people stopped by her home, she would scold them and use improper language. Her son had taken her to the hospital, but the doctor couldn’t understand her condition. Then our Elijah Challenge workers ministered to her in Jesus’ name, and Rajal’s mind was restored! Her family then believed and accepted Jesus Christ as the gospel was shared with them.”
. “A man named Kailash (below) had high fever and pain in his body for several days. Despite his taking a prescription drug, the fever would not relent. Kailash was frantic thinking that he might have COVID-19. Then our Elijah Challenge workers came and ministered to him in the name of Jesus Christ. The symptoms vanished and Kailash was totally healed. He believed and accepted Jesus Christ as his only Lord and Savior.”
. “After baby Tohini (below with mom) was born, she wouldn’t open her eyes. They had spent much money consulting a doctor, but Tohini’s eyes remained shut. Our Elijah Challenge workers ministered to her in the precious name of Jesus, and her eyes finally opened. Her grateful parents believed and accepted Jesus Christ.”
. “Phula Oram (below) had severe arthritis which kept her from walking for three years. She was treated at her village hospital, but the arthritis persisted. They then referred her to the more advanced hospital in the city, but Phula could not afford the more expensive treatment there. But after our Elijah Challenge workers ministered to her in Jesus’ wonderful name, Phula’s arthritic condition was miraculously healed. Along with her family, she accepted Jesus Christ as Lord and Savior.”
. “One day a nine-year-old girl named Khamasini (below) got a white glue called Fevicol into her eye. It stung very badly and the eye become infected. Her parents immediately took her a doctor, but he wasn’t able to do much for the eye. The stinging and burning sensation in her eye would not relent, and poor Khamasini could only cry and weep in pain. Then her father got connected with our Elijah Challenge workers. He brought the girl to our worker’s house where she received ministry in Jesus’ name. The burning in her eye ceased, and she was miraculously healed. Her thankful parents believed in the Lord and accepted Jesus as Christ.”
.