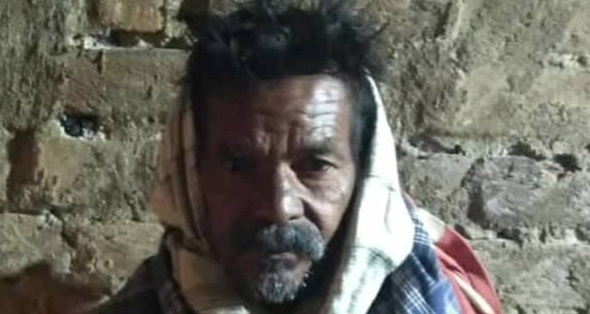 “Praise God for these wonderful reports from our Elijah Challenge workers!”

“Elderly Ramseb (above & below) was mentally ill. He had stopped eating and taking a bath. He would go outside without knowing where he was going. At first his adult children would watch over him, but eventually he became too much to handle. They were forced to keep him confined inside his room. But after they came to know about our Elijah Challenge workers, they asked them to come minister to their dear father. After a few days of ministry, Ramseb’s mind was restored. He and his grateful children accepted Christ.”
. “For a long time young Ram (below) was blind. He needed the help of his family members to do anything at all. Long ago he had taken medicine, but he remained blind. Then our Elijah Challenge workers ministered to him, commanding his eyesight to be restored in the name of Jesus. And the Lord restored his sight. Ram believed and accepted the Lord.”
. “A boy named Susant (below) had severe pain in his mysteriously swollen legs. His parents took him to the local hospital, but the doctor could not diagnose his condition. Nevertheless he prescribed medicine for the boy. But the pain and swelling persisted. After that his parents took Susant to the major hospital in the state capital, but there was no effective treatment for him there either. Finally, our Elijah Challenge workers ministered to Susant in the name of Jesus, and he was miraculously healed. After that his parents accepted Christ.”
. “For a few months, Roshni (below) suffered from stomach pain in connection with her menstrual period. She would become feverish when the pain struck. She took medicine, but it didn’t help. Then her parents gave her ayurvedic medicine, but there was no change. But Roshni was wonderfully healed after our Elijah Challenge workers ministered to her in the name of the Lord. Along with Roshni her parents accepted Jesus Christ.”
.

“Kailash (below), a young boy, had severe jaundice. He wouldn’t (or couldn’t) talk or even open his eyes. His family was distraught. What was going to happen to their little boy? Relatives and neighbors had gathered to show their concern for the boy’s serious condition. But it happened that one of our Elijah Challenge workers lived nearby. The family went to him and urgently beseeched him to help little Kailash. With little delay our worker went to their home and ministered to the boy in the wondrous name of Jesus Christ. Instantly Kailash opened his eyes and started speaking. His thankful parents accepted Jesus as their only Lord and Savior.”
.