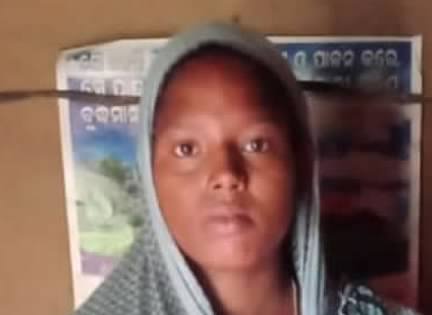 “Thank you so much for your intercessory and financial support for the extension of His kingdom among unreached villages during this critical period. Over the last 15 days, a strict lockdown has again been extended in India. Despite the lockdown our outreaches and house churches are going smoothly. Please pray for the safety of our harvest workers.”
.

“Shita (above & below), living in the village of Karmapada, suffered from an issue of blood which from time to time would cause her to lose consciousness. For a few months her family had her treated at a district hospital. But even though she took medicine the bleeding persisted. Now her husband had heard about the ministry of our harvest workers. Then one night after she went unconscious again, he summoned our workers who went and ministered to her in Jesus’ name. Through them she was miraculously healed from the bleeding. From that day onwards there was no more loss of consciousness. Both Shita and her husband accepted Jesus Christ.”
. “Pancami (below) lived in the (similarly-named) village of Kamapada, and had been admitted to the hospital to give birth. But according to the doctor she lacked sufficient hemoglobin and moreover had water in her stomach. He informed the family that she had to undergo an expensive operation before the delivery—something her family could ill afford. Her father-in-law had heard about our ministry, and went to meet with our Elijah Challenge harvest workers. They assured him that the Lord Jesus would do a miracle for Pancami. They went to the hospital and ministered to her in the name of Jesus Christ. Upon examining Pancami afterwards, the doctor was astonished to see that there was no problem with her hemoglobin and water in her stomach. Praise the Lord Pancami then gave birth normally. She and her entire family believed on and accepted the Lord Jesus Christ.”
. “In the village of Bheluabhal, a man named Mahendra Hemram (below) would from time to time be possessed by demons. Mahendra would just leave home without telling anyone. After a few days his family realized that he had a serious problem. He would disappear into the jungle, and usually not return home until at night. When questioned by his parents, he wouldn’t say anything. They tried to keep Mahendra in his room, but he wouldn’t stay. Then they brought in a local sorcerer who performed mantras on him, but the demons wouldn’t leave. Only after they called our workers to minister to him was Mahendra completely set free from the demons.”
. “For a long time an elderly woman (below) was afflicted with severe arthritis in both legs, rendering her unable to walk. This was despite her taking both allopathic and ayurvedic medicine. Our Elijah Challenge workers came and ministered to her over a few days. In Jesus’ name they would take her by the hand and help her get up and walk. The Lord graciously healed her. Now she’s able to get up by herself and walk. Her family believed and came to Jesus Christ.”
.