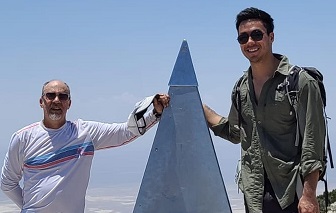 Jesus commanded a storm to stop. The disciples feared death. Jesus said to the storm “Peace! Be still!” Jesus exercised great faith and used authority over nature and any evil spirits using the storm to drown Him and the disciples.

I hiked to the top of Guadalupe Peak with my son Timothy. It is the “top of Texas” at 8750 feet. It is June and it was 100 degrees. There were many switchbacks as we ascended 4 miles and 3000 feet to the top. About a half mile from the peak I was dehydrated and had leg cramps. I thought about returning. But I drank my electrolyte water, stretched out the cramp, and continued slowly ascending switchbacks. We scrambled up rocks and finally made it to the summit.

Tim was concerned we would not have enough water for the descent. We rationed the water and started down. There was very little shade and the sun was sucking all water out of my body. I couldn’t even make saliva! At one point I thought I would lie down and die of dehydration, burned by the sun. I saw clouds forming over nearby mountains, but the prevailing winds pushed against the clouds and they did not move to cover the sun. As I stumbled down the switchbacks, I prayed, “Father God, in the name of Jesus, move those clouds over the sun.” They seemed to slowly move toward the sun.

Then I used faith and authority as Jesus did and said, “Clouds, move and block the sun!” They not only slowly moved to block the sun, the clouds released drops of rain! I felt a surge of strength. It was a blessing. (See photo down below.)

We rested, drank the rest of our water, and made it to the trailhead exhausted.

I believe there are times we can speak and issue commands with faith and authority like Jesus to save our lives or the lives of other people.
. Hurricane Harvey in Houston: a testimony of miraculous deliverance
.