Black magic tormented a mother and children with fear and apparent sickness. A sorcerer failed to help. BUT Jesus…! 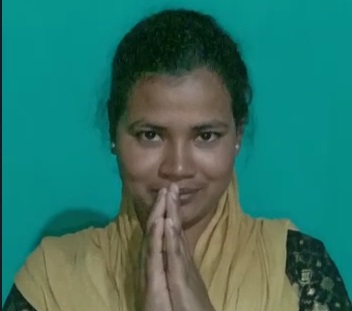 “Greetings to you in Jesus’ precious name. Thank you so much for your intercessory and financial support for the extension of His kingdom here in India. By the grace of God, we have been able to harvest thousands of souls in our harvest field here.”
.

“Due to black magic directed against them, the family of Alma Kerketta (above & below) suffered torment at the hands of a demon. Most of the time Alma would feel sick, but after seeing a doctor she was told that tests showed her to be in normal health. Then her children began to feel sick as well. She then secured the help of a sorcerer, but even after a few weeks the fear and the sickness were ever present. Then our Elijah Challenge workers came and rebuked the demon with authority, commanding it leave Alma and her family and her home in the name above all names—Jesus Christ. Alma and her family were totally delivered from the attacks and healed from sickness they felt. She then believed and accepted Jesus as her only Lord and Savior.”
.

“A young girl named Nirupama (below) had a severe case of jaundice which left her in critical condition. Her parents took her to the hospital where she was treated for a long time. But her condition remained very weak. Then her parents heard about our ministry and then called our Elijah Challenge workers. They came and over two evenings ministered to Nirupama in the wondrous name of Jesus. Marvelously, she was healed from the jaundice. Both Nirupama and her parents then accepted Jesus Christ.”
.

“Binita (below) was a day laborer, but due to severe gastritis could no longer work to help support her family. At night because of the pain she would scream waking up her children. Seeing their mother in extreme pain they would nestle up to her and cry, fearful of what was happening to their mom. Prescription medication had not helped. Then our Elijah Challenge workers came and ministered to Binita with supernatural authority and power in the name of our Messiah Jesus. She was miraculously healed from the gastritis. Binita accepted Jesus as her only Lord and Savior, and was able to go back to work as a day laborer.”
.

“An elderly woman named Gardia (below) suffered from severe back pain for a long time. As a result she had difficulty working to support herself. Taking local village medicine had not helped her at all. She then went to the district hospital where she was prescribed medication, but that was to no avail as well. Then our Elijah Challenge workers ministered to her in the name of our Messiah Jesus. Gardia’s back was then wonderfully healed. She accepted Jesus Christ.”
.

“For a month Nalini (below) had a bad cough, a cold and a fever. She was given prescription medicine by the doctor she consulted, but she did not recover. Then our Elijah Challenge workers came and prayed over her, ministering to her with power and authority in Jesus’ name. Nalini’s cough, cold and fever then subsided. Along with her husband Nalini then accepted Jesus Christ.”
.