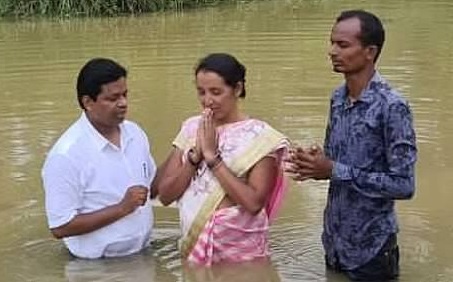 Last year in June Mr. Nila Pradhan and his wife, members of a Hindu high caste known as the Kulthia, were baptized in water as followers of Jesus Christ. They put their faith in Jesus Christ alone after Mrs. Pradhan was miraculously delivered from horrid demon-possession. (Click on the link below for their testimony.)

Brother Pradhan had been forced to sell some land and expensive ornaments to raise over 800,000 rupees to pay for his wife’s treatment by sorcerers—who it turned out were helpless to do anything. But when they came to see our India Coordinator Subodh Jena, his wife was miraculously set free in the powerful name of Jesus Christ.

They began following the Lord faithfully. Recently a house church was planted in their home in their village.

Both Brother Pradhan and his wife proudly declare that our Lord Jesus has wonderfully delivered them, and whatever happens they cannot deny Him.

Please pray for them as they are growing in the Lord.