Hindu woman paralyzed by stroke was totally bedridden. But she got up and began walking in Jesus’ wondrous name. 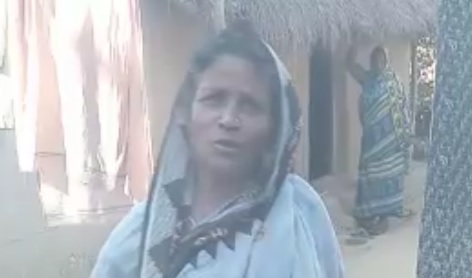 “Thank you so much for your intercessory and financial support for the ministry. We’re so glad to have received some outstanding reports from the beginning of this month. Praise the Lord!”
.

“Three years earlier, Gita Rani (above & below) had a stroke which paralyzed her. She was transported to the hospital where she underwent treatment for half a month. But she didn’t recover and was taken back home. For a long time she remained bedridden. Somehow her family heard about our Elijah Challenge workers and got connected with them. Our workers went to their home and ministered to Gita with the supernatural authority and power in the wondrous name of our Messiah Jesus. Miraculously, Gita got up from her bed and started walking around again. Along with her astonished and grateful family Gita accepted Jesus as her only Lord and Savior.”
.

“For six months a woman named Runi Pile (below) could not walk after suffering from a stroke. It was very difficult for her to get out of her bed to go to the bathroom. After consulting with doctors she had been put under medication for a long time, but her condition remained. Then our Elijah Challenge workers came and ministered to her with authority in the name of our Lord Jesus Christ. Runi was miraculously healed and able to walk again. She then put her faith in Jesus, receiving Him as her Lord and Savior.”
.

“A woman named Rajani (below) had diseased skin which caused itching to erupt over her body. Her doctor prescribed lotion for her skin as well as tablets to take, but the itching nevertheless continued. Then our Elijah Challenge workers came and ministered to her in Jesus’ marvelous name. Rajani’s skin was healed and the itching ceased. She then believed and accepted Jesus Christ.”
.

“An infant boy named (below) Mali Munda had a very high fever. It stubbornly persisted no matter what his mother did. She then brought Mali to the home of one of our Elijah Challenge workers. After they ministered to him in Jesus’ wondrous name, Mali’s fever broke and his temperature went down to normal. Both his mother and father then accepted Jesus Christ.”
.

“For a week, Nasa Khura (below) experienced loose bowel movements. The medication she was given proved unable to control her bowels, and her condition deteriorated seriously. Then our Elijah Challenge workers came and with supernatural authority and power ministered to her in the glorious name of our Messiah Jesus. Nasa was wonderfully healed as her bowel movements were restored to normal. She then believed and accepted Jesus Christ.”
.