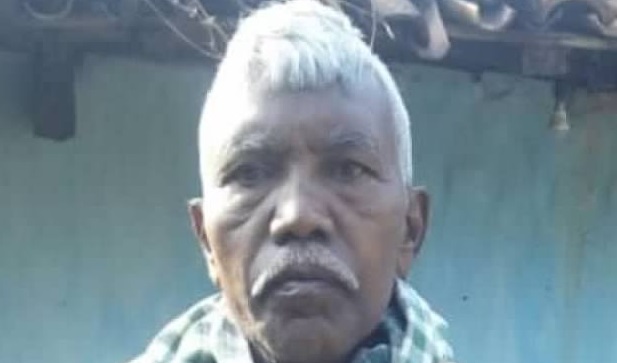 “Thank you very much for your intercessory and financial support for the extension of His kingdom here in India. We rejoice receiving such powerful ministry reports from our harvest workers.”

“For six months a man named Sudarshan Tirkey (above & below) had been totally paralyzed with a stroke, unable to get up from his bed. His son took him to the hospital where he was admitted for a few weeks. But despite treatment with prescription medication, Sudarshan remained paralyzed. His The doctor advised the family to take him home where he could continue the medication. Then our trained Elijah Challenge workers came and over three evenings ministered to him with authority and power in the name of our Messiah Jesus. Sudarshan was miraculously healed, able to get up and walk normally. His entire family then believed and accepted Jesus Christ as their only Lord and Savior.” “For the past few weeks, Kamini was possessed by a demon spirit. Her parents summoned a sorcerer who came and spoke mantras over her and also sacrificed a chicken and a goat for her. But instead of leaving her, the demon began shouting even more and creating more trouble through her. Our Elijah Challenge workers were then summoned. They came and with authority commanded the demons to leave Kamini in the wondrous name of Jesus Christ. Within a few minutes, they left her. The entire family then accepted Jesus Christ.”
. “Mamata Jojo worked as a maid in a private home in the state of Kerala, but she suffered from a problem with her menstruation. In much pain she was forced to return home. Then Mamata attended one of our house churches where our harvest workers ministered to her in the name of Jesus Christ. She was wonderfully healed, and accepted Jesus Christ.”
. “Sibani, a young woman, had a skin disease for a year. For months she had faithfully applied the medication prescribed for her by her doctor, but there was no improvement. She then attended one of our house churches where she was miraculously healed after our trained workers ministered to her in Jesus’ name. Sibani then accepted our Lord Jesus as her personal Savior.”
. “Chole suffered from a case of arthritis for a long time. Even after she took the medicine prescribed by her doctor for a few months, the painful arthritis did not relent. Then our Elijah Challenge workers came and ministered to Chole in the wondrous name of our Messiah Jesus. She was then totally freed from the arthritis. After our workers shared the gospel of the kingdom of God with her and her family, they accepted the Lord Jesus Christ.”
.